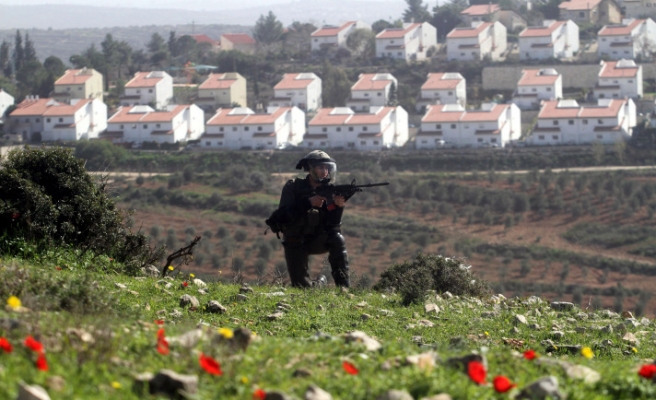 The rocky valley north of Jab'a, scattered with olive and pine trees and dry streams long evaporated by the searing heat, would be unremarkable had it not become the latest point of friction between Israel and the Palestinians.

Days after a ceasefire was reached in the war in Gaza last month, Israel announced that 400 hectares (988 acres) west of Bethlehem, in the occupied West Bank, was now "state land" - that is territory for Israel, not land that will be part of any future Palestinian state.

Peace Now, an Israeli human rights group, described it as one of the biggest land grabs by Israel since the 1980s.

The United States, the European Union, the U.N. and Japan lined up to condemn the appropriation, in an area where 20,000 Palestinians live in 10 villages and which Israel says it intends to keep in any final land-for-peace agreement.

Prime Minister Benjamin Netanyahu may have thought the timing was right to assuage rightists in his coalition after an inconclusive Gaza war while the West was distracted by Ukraine and Iraq. But U.S. and European officials are determined not to let the seizure go unchallenged.

Lars Faaborg-Andersen, the EU ambassador to Israel, delivered a message of objection to Israel's deputy foreign minister on Monday, calling the land confiscation an "alarming development" that squanders peace efforts.

"We think this is one of the worst signals to send in the current situation," Faaborg-Andersen said on Wednesday, urging Israel to reverse the measure and warning it against further land seizures, which he said were being rumoured.

"These are particularly strategic and particularly damaging settlement activities (that are) extremely unhelpful," he said.

Even within Israel's government there was sharp criticism of the decision, taken by the defence minister and prime minister's office without wider consultation - a common practice when it comes to the West Bank, which has been administered by the defence ministry since it was occupied in 1967.

Justice Minister Tzipi Livni denounced it as "inherently wrong", while Finance Minister Yair Lapid said it was damaging to the nation's international reputation.

"Maintaining the support of the world was already challenging, so why was it so urgent to create another crisis with the United States and the world?" he asked, posing a question echoed by many inside and outside Israel.

The short answer is that it helped quell unrest in Netanyahu's coalition, especially from right-wing nationalist leader Naftali Bennett and Foreign Minister Avigdor Lieberman, who had wanted an even tougher war waged against Hamas in Gaza and were demanding hard-nosed action from the prime minister.

Government officials said the seizure was a response to the abduction and killing of three Jewish teenagers in the West Bank in June.

In targeting Hamas, the land seizure also sent a message to Fatah, the party of Palestinian President Mahmoud Abbas, which struck a deal to form a unity government with Hamas in April, angering Israel.

With the United States fixated on events in Iraq and Syria, and the European Union consumed with the crisis in Ukraine, Netanyahu may also have calculated that any blowback from his largest trading partners would be muted and manageable.

Although the building of 1,000 settler homes in the appropriated area has long been mooted, no plans for the project - an endeavour certain to draw Palestinian and international outrage - were announced in tandem with the land seizure.

The move provides no succour to the Palestinians who have worked for generations the hilly, rocky land around Jab'a, just east of the Green Line that marks the pre-1967 West Bank border.

"If this plan goes ahead, we will be left in a prison, cut off from Bethlehem and all the villages around," said Ahmad Sukar, the head of the council of Wadi Fukin, a farming village lying just northeast of the land being appropriated.

What's more, many Palestinians see the reason Israel has given for the seizure is seen as illogical.

"They are effectively saying 'because these Israelis were killed, we're taking your land'," said a Palestinian official in Ramallah. "So when Palestinians are killed by Israel, does that mean we get Israeli land in return?"

Locals have already begun filing petitions against the seizure in Israeli courts. If they can prove they own land in the area, or that they have farmed the land there in the last 10 years, it may be possible to limit how much is confiscated.

But the legal track record with such seizures, scores of which have taken place since 1967, is on Israel's side based on its twisted interpretation and application of Ottoman law which pre-dated the British Mandate in Palestine.

Even if Israel wins all legal challenges and incorporates the land into the existing Gush Etzion settlement bloc, it may take no further action for years, as has been the case in other highly sensitive West Bank appropriations.

Most countries view the settlements that Israel has built in the West Bank and East Jerusalem - where some 500,000 Israelis now live among 2.4 million Palestinians - as illegal under international law. Israel disputes this and says the future of settlements should be resolved in peace talks.

Jewish settlers in Geva'ot, a caravan outpost of 19 families that sits on a hill adjacent to the seized land and is slated for expansion, are not hopeful it will ever be enlarged.

"No one is excited here, we don't think it's going to happen," said Nomi Landau, 29, a special needs teacher from Boston who has lived in the settlement for four years.

In the end, Netanyahu may have succeeded in placating his coalition partners and hitting back at Hamas and Fatah.

But he has sown deeper mistrust with Palestinians, may leave the settlers - part of his core constituency - frustrated, and has made a two-state solution based on the 1967 borders still harder to achieve.

"Even if Netanyahu's timing was good - at least as far as (minimising) global condemnation is concerned - the price Israel ultimately pays may be high, and payback might come sooner than he bargained for," wrote Dimi Reider, an associate fellow of the European Council on Foreign Relations, warning of the risks of boycotts from Europe and resumed military conflict with Hamas.