A former Israeli soldier said she saw nothing "wrong" in having posted much criticised pictures of herself on Facebook humaliating detained Palestinians. 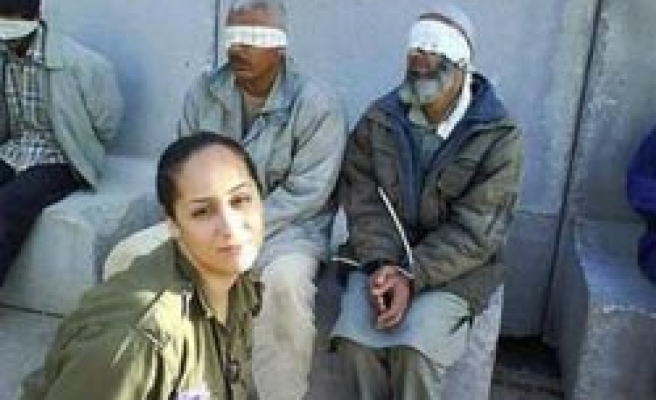 A condemnation wage was sparked by a Facebook photos that a former female Israeli soldier put on the internet, posing next to handcuffed and blindfolded Palestinian detainees.

"This shows the mentality of the occupier, to be proud of humiliating Palestinians. There is nothing in the world that can justify [this] humiliation that is part of the Israeli occupation practices on [a] daily basis," Maan quoted from a statement by the West Bank Government Media Center.

The images, from Eden Abergil's "Army -- the best period of my life" photo album on the social media website, drew international attention and condemnation by Israel's military after they appeared in Israeli newspapers on Monday.

Palestinians have long claimed that they are subject to humiliating and degrading treatment while held in Israeli custody, but Israeli authorities have always rejected such allegations.

"Occupation is unjust, immoral and, as these pictures show, corrupting. It should end and Palestinian rights and dignity be respected. We call upon all human rights defenders to make all efforts to end the Israeli occupation and close this dark era for humanity," the statement added.

The series of images, since removed from her page, displayed Abergil posing with blindfolded and handcuffed detainees who were apparently seized during an army raid in the occupied West Bank.

The photos shown in Facebook are seen to promp lurid comments from other users of the popular social networking site.

Israeli-detained Palestinians are often bound with plastic handcuffs and blindfolded while waiting to be questioned.

Abergil said she saw nothing "wrong" in having posted much criticised pictures of herself on Facebook.

Abergil said the photographs, which she has since removed from her Facebook page, were not intended to make a political statement or demonstrate contempt for Palestinians.

"I still don't understand what was wrong," the former conscript said in an interview on Israeli Army Radio on Tuesday.

Implying the photo she claimed that "it was solely to show the experience of military service."

Israel controls much of the occupied West Bank, captured in a 1967 war, which Palestinians want as part of a future state along with the Gaza Strip.

"Not answerable to military"

Abergil, who completed her mandatory two-year army service about a year ago, said the photographs were taken in 2008.

As a civilian, Abergil is no longer directly answerable to the military, but an army spokesman condemned her actions as "disgraceful".

Captain Barak Raz, the Israeli army spokesman who appeared in the video, said the photographs were in "total opposition" to the army's "ethical code".

The Facebook controversy is the latest since March, when Israel's army relieved a soldier of combat duty and called off a raid into the West Bank after he posted details on the social networking site. The soldier had described in a status update when and where his unit planned to conduct a "clean-up" arrest operation.