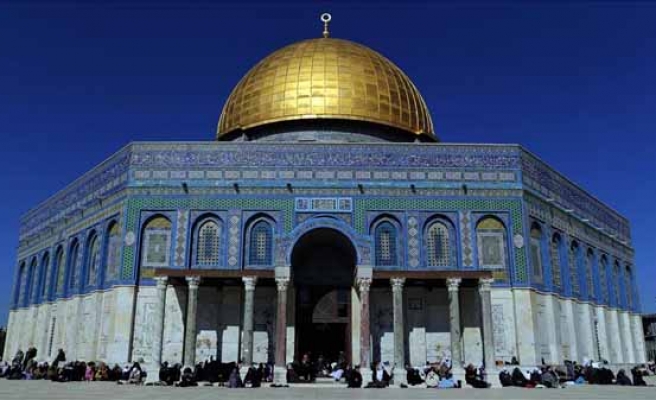 In a new report, the Media Center for Jerusalem and Al-Aqsa Affairs stated that, last month alone, 1,149 Israeli settlers had entered the mosque compound.

"This number represents an increase of 120 percent on the number of settlers who entered the site in January, when 511 settlers entered the compound," the NGO asserted.

"February also saw larger groups of settlers enter the compound, usually under police protection, along with repeated attempts by Jewish settlers to perform Talmudic rituals at the walls of mosque, especially near the ‘Door of Mercy’ [on the mosque’s eastern wall]," the report stated.

The center also noted that Israeli police had barred dozens of Palestinians from entering the mosque compound -- in some cases they were barred from entering Jerusalem altogether.

The NGO went on to warn of increasing settler violations at Al-Aqsa in March and April, which will see several Jewish religious holidays, when settlers traditionally force their way into the compound in greater numbers.

It is notable in this regard that, on Tuesday, the Israeli authorities allowed extremist Jewish rabbi Yehuda Glick to visit the Al-Aqsa compound for the first time since he was banned from the flashpoint site in 2014.

Witnesses told Anadolu Agency that Glick had toured the mosque compound, where he took photos before leaving.

Glick was banned from the Al-Aqsa compound in 2014 after being accused of having assaulted a Muslim woman at the site.

Last week, however, an Israeli court dropped the charges against him.

Glick frequently calls on extremist Jewish settlers to enter Al-Aqsa in force. He also openly calls for the destruction of the mosque so that a Jewish temple might be built in its place.

Some observers attribute the recent upsurge of violence in the Israeli-occupied Palestinian territories -- which began last October and in which scores of Palestinians have been killed -- to increasingly frequent incursions by Jewish settlers into the Al-Aqsa compound, which for Muslims represents the world’s third holiest site.