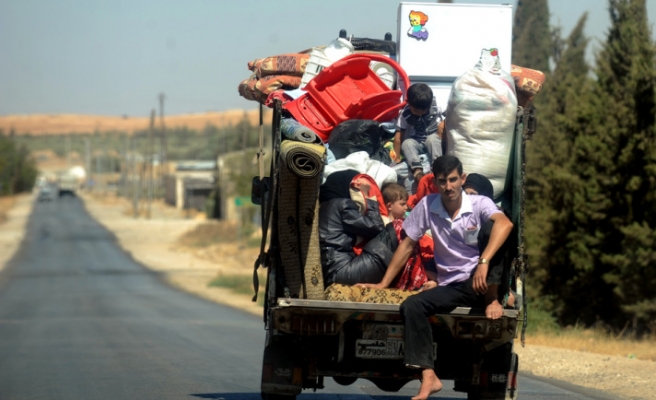 Syrian army bombardments killed 21 people in a Damascus suburb on Friday in an intensifying civil war that the U.N. refugee agency said had prompted more than 200,000 people to flee the country.

In an accelerating exodus, more than 3,500 Syrians crossed into Turkey in the past 24 hours, Turkish officials said, one of the highest daily totals since initially peaceful protests against President Bashar al-Assad erupted in March 2011.

"In Jordan, a record 2,200 people crossed the border overnight and were received at Zaatari camp in the north," Adrian Edwards, spokesman for the U.N. High Commissioner for Refugees, said in Geneva.

Assad's forceful response to unrest inspired by Arab uprisings in Tunisia, Egypt and elsewhere has spawned an armed insurrection and plunged Syria into a civil war in which over 18,000 people have been killed, according to a U.N. estimate.

There was no let-up in the violence on Friday, the Muslim holy day that has often been a focus for anti-Assad protests.

The Syrian army pounded the Damascus suburb of Daraya, where the 21 deaths reported by opposition activists brought the toll from a three-day-old military assault to at least 70.

Assad's forces are trying to regain control of the capital's outlying districts such as Daraya, a Sunni Muslim working class township that sprawls among farmlands where insurgents often take refuge after attacking government troops.

"There are lots of bodies trapped in destroyed buildings and civilians are trying to flee towards Damascus," an activist in Daraya, who gave his name as Abu Kinan, told Reuters by phone.

Syrian authorities restrict media access, making it hard to verify accounts by both sides in the conflict.

Assad's elite forces, mostly drawn from his minority Alawite sect and increasingly used to keep control of Damascus, are based in hilltop compounds in the capital and surrounding areas.

About 220 people were killed in Syria on Thursday, according to the opposition Syrian Observatory for Human Rights.

Death tolls on that scale have become commonplace since the killing of four of Assad's senior aides in a July 18 bombing prompted a rebel offensive that led to fierce military counter-attacks in Damascus and the northern city of Aleppo.

One school used as a base by rebels was bombed twice during the night. Abu Ahmed, a resident living next to the school, said:

"The rebels stay in abandoned police stations and hospitals, but the army knows exactly where they are."

On a frontline in the southern Saif al-Dawla area, rebels destroyed an armoured personnel carrier and the army fired tank shells and mortar bombs, but made no attempt to advance.

The body of a civilian named Mohammed Tabraji, 25, lay in the street. His friend Mohammed al-Arabi said they had been looking for a place to buy bread when a sniper shot Tabraji.

Turkey alone hosts more than 78,000 Syrian refugees, according to its Disaster and Emergency Management Directorate, a sharp rise on the 44,000 registered there at the end of July.

Ankara, saying it will not be able to accommodate more than 100,000 Syrian refugees, has suggested that the United Nations set up a safe haven inside Syria to staunch the outflow.

The chances of gaining a U.N. Security Council mandate for such a safe haven, which would require military protection, are close to zero, given the rejection by veto-wielding powers Russia and China of any outside intervention in Syria.

French Defence Minister Jean-Yves Le Drian said on France 24 television on Thursday that an "international coalition" of Western nations and allies could consider setting up a limited no-fly zone over part of Syria without such a mandate.

"The scenario mentioned by (U.S. Secretary of State) Hillary Clinton of a particular zone where there could be a banned area is something that needs to be studied," said Le Drian, the first senior French official to air the possibility of action by an "international coalition," rather than the United Nations.

France chairs a meeting of U.N. Security Council foreign ministers in New York next week which it has said will focus on humanitarian solutions for Syrians caught up in the conflict.

Foreign Minister Laurent Fabius said he had invited Turkey, Iraq, Lebanon and Jordan to attend the conference, given the number of refugees and fears of the conflict spreading.

At least three people, including a Sunni commander, were killed on Friday in a fifth day of Sunni-Alawite fighting in Lebanon's northern city of Tripoli, where the bloodshed in Syria has aggravated old sectarian tensions.

A Lebanese security source said the Tripoli violence, in which 16 people have been killed this week, was "alarming and dangerous .. It is very likely that it will escalate this time".