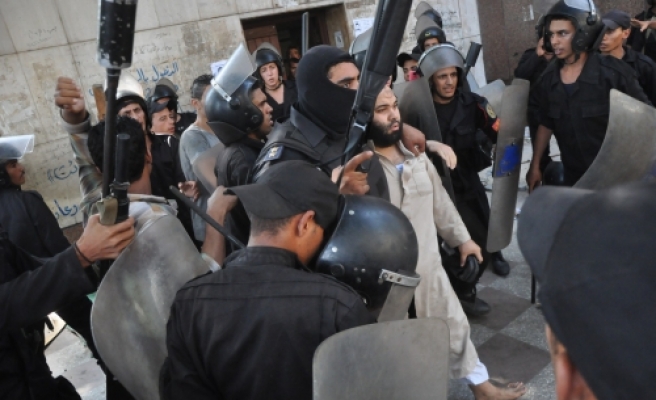 The 300 people were divided into smaller groups and the first batch left the mosque at 6:30 pm Cairo local time, according to an Anadolu Agency correspondent on the scene.

According to AA correspondents, men are being taken into police vehicles while security forces promised to let women walk free.

Hundreds of people besieged inside Fath Mosque in Cairo's Ramses Square had earlier gone on a hunger strike.

"Around 300 people, mostly women, have launched a hunger strike until a safe exit is provided for them or being protected from thugs and security forces," Heba Zakaria, an Anadolu Agency journalist, said.

She denied media reports that all protesters had been cleared from the mosque.

"We are still besieged by army and police troops along with thugs who are threatening us with death," she said.

"We have been told by army troops that we won't be evacuated for fears of being killed by thugs and that they would not be able to protect us," she added.

Hundreds of protesters, including women and children, had taken refuge in the mosque following clashes between supporters of ousted president Mohamed Morsi and security forces in Ramses Square Friday.

The protesters feared that they would be attacked by thugs and angry residents if they went out, and decided to stay inside the mosque.

After security forces had besieged the mosque since Friday night, police managed at one point to get inside and drag some of the holdouts outside, where they were confronted by hostile crowds.

Police managed to drag outside seven or eight men and were then confronted with angry neighbourhood residents who attacked them with sticks and iron bars.

The Health Ministry said that at least 638 people had been killed in nationwide violence since Wednesday, including 288 in Rabaa and 87 in Nahda.