Football teams to vie for 'Legitimacy Cup' in Egypt 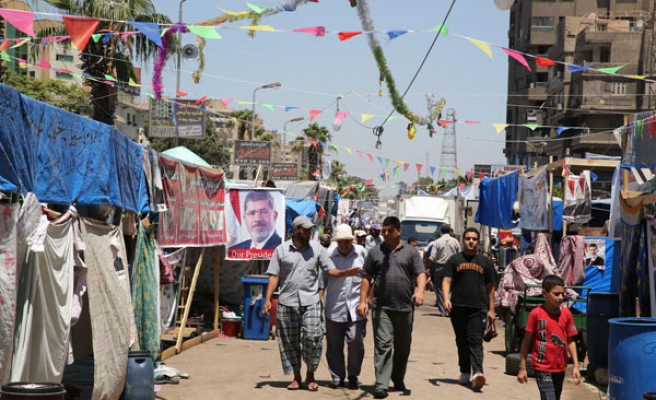 Although they support the same cause, supporters of ousted president Mohamed Morsi camping out in two major sit-in venues – Cairo's Rabaa al-Adawiya Square and Giza's Nahda Square – plan to hold a football game Sunday evening pitting players from each camp against one another.

Two football teams representing the twin sit-ins will vie for the 'Legitimacy Cup,' the National Alliance for the Defense of Legitimacy (NADL) – a pro-Morsi coalition of largely Islamist groups and figures – said on Sunday.

Supporters of the ousted leader have been camped out in the two squares for more than one month to reject the July 3 ouster of Morsi, the country's first democratically elected president, describing the move as a "military coup."

They demand the Islamist leader's return to office and the reinstatement of the suspended constitution and the dissolved Shura Council (the upper house of Egypt's parliament).

According to the NADL, five protests will be staged across Cairo, along with four others in Giza, later on Sunday.

"Millions of people are determined to continue their sit-ins in governorates throughout Egypt… especially in Rabaa al-Adawiya and al-Nahda squares, until the coup is reversed," the alliance said in a statement.

The government has described the pro-Morsi sit-ins in the two squares as a "threat to national security" and mandated the interior minister to take "all necessary measures" to disperse them.

On Wednesday, interim Prime Minister Hazem al-Beblawi said the government would not retreat from its stated plan to break up the two sit-ins.