Two suspected Palestinian men killed four people in a Jerusalem synagogue before being shot dead by police, Israeli police and emergency services said, the deadliest such attack in the city in years. 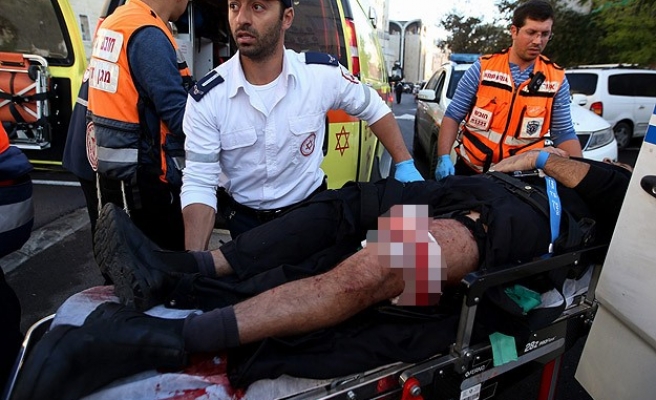 Four Israelis were killed and seven others injured in an attack by two Palestinians on a Jewish synagogue in West Jerusalem, with the two attackers gunned down by Israeli police in the immediate wake of the attack.

According to Israeli police spokesmen Micky Rosenfeld, two suspects entered a synagogue in the Har nof neighborhood in Jerusalem with knives and axes.

"Police confirm four Israelis killed in synagogue attack in Jerusalem. Both terrorists shot and killed by police," he added on Twitter.

Seven others were injured in the attack, he added.

Earlier in the day, Israel's Channel 2 put the death toll of Jewish worshippers at five.

Police said at least one of the assailants was from East Jerusalem, the predominantly Palestinian side of the city.

Dozens of Israeli troops are surrounding the East Jerusalem homes of two slain Palestinians accused of carrying out a deadly attack, eyewitnesses said.

According to the witnesses, the Israeli troops stormed Jabal al-Mukaber neighborhood in large numbers and surrounded the houses of the suspected attackers identified earlier as cousins named Ghassan and Oudai Abu Jamal.

The Israeli radio said the pair had used to work at a grocery near the attacked synagogue in Har Nof district.

Palestinian radio reports described the attackers as "martyrs" and Hamas praised the attack. Loudspeakers at mosques in Gaza called out congratulations.

"Hamas calls for the continuation of revenge operations and stresses that the Israeli occupation bears responsibility for tension in Jerusalem," Hamas spokesman Sami Abu Zuhri said.

Israeli Prime Minister Benjamin Netanyahu blamed the attack on both Hamas and Palestinian President Mahmoud Abbas, who he accused of urging Palestinians towards violence.

"This is a direct result of incitement led by Hamas and Abu Mazen, incitement that the international community has been irresponsibly ignoring," he said in a statement.

Violence in Jerusalem, areas of Israel and the Israeli-occupied Palestinian territories has surged in the past month, fuelled by a dispute over Jerusalem's holiest shrine, which has given rise to fears of a religious conflict.

Five Israelis and a foreign visitor have been deliberately run over and killed or stabbed to death by Palestinians. About a dozen Palestinians have also been killed, including those accused of carrying out those attacks.

On Monday a Palestinian bus driver was found hanged in a vehicle in Jerusalem. Israeli police, citing autopsy results, said he had committed suicide but the driver's family said they suspected foul play and the incident led to clashes.

Hamas called for retaliation after the bus driver's death.

Residents trace the violence in Jerusalem to July, when a Palestinian teenager was burned to death by Jewish assailants, an alleged revenge attack for the abduction and killing of three Jewish teens.

The summer war in Gaza and a row over access to a Jerusalem compound that is sacred to Muslims and Jews alike have also been triggers for violence.

The synagogue attack was the worst in the city since 2008, when a gunman shot dead eight people in a religious seminary school in the city.

Media reports said one of the synagogue attackers was armed with a gun and a hospital spokesman said two people were being treated for gunshot wounds, but police did not immediately confirm that either of the attackers fired a gun.