"When Aleppo is freed, we will have the northern part of Syria and will ask (the opposition) to return home," Maleh said. 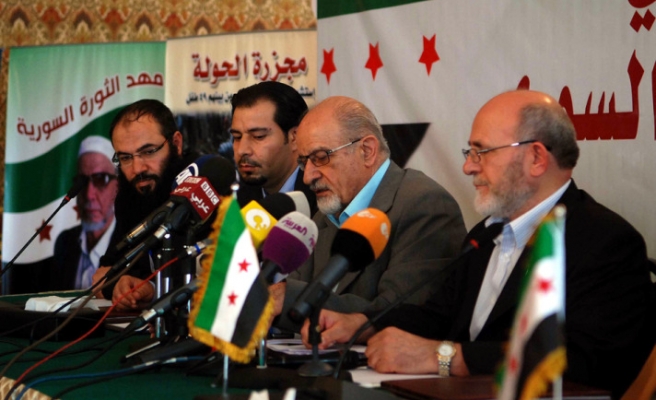 The head of the rebel Free Syrian Army attacked on Wednesday the formation of a new political coalition outside Syria that plans to establish a transitional government, calling its leaders opportunists who seek to divide the opposition and benefit from the rebels' gains.

The Council for the Syrian Revolution was launched by a group of 70 exiled Syrian activists at a news conference in Cairo on Tuesday.

The emergence of new alliance marks the latest effort by Syria's divided opposition to forge a political alternative to President Bashar al-Assad, whose forces are trying to put down a 16-month armed uprising.

The Syrian military has stepped up a military campaign to drive rebels out of Aleppo, the country's biggest city, using helicopter gunships and other heavy weapons.

The politicians who formed the new coalition "were hit by a fever of ... acquiring positions which led them to announce the founding of a transitional government ... to ride over our revolution and trade with the blood of our martyrs," the head of the Free Syrian Army, Colonel Riad al-Asaad, told Al Arabiya news channel.

"But in reality they are trying to revive the falling regime of Assad by taking a decision without returning to the people who have shed blood and tears to achieve their independence from Assad's criminal gang," he added.

The announcement of plans to form a transitional government is mainly aimed at "pleasing the outside (world) while making the internal (groups) fight against one another to destroy the unity of the people which the Free Syrian Army stands for," Asaad said.

"When Aleppo is free, opposition to return home"

The head of the new coalition, Haitham al-Maleh, said he would begin a dialogue with all members of the opposition, including the Free Syrian Army, about the formation of a transitional government.

"We will certainly have members from the free army in the new government," Maleh, a prominent member of the Syrian opposition, said at Tuesday's news conference.

Maleh told Reuters the new alliance would act as an alternative to the SNC which he said "had failed to help the Syrian revolution". It would work to get more help to rebels, he said.

Maleh, a long-standing dissident against the Assad family's four decades in power, resigned from the SNC in March, saying he had given up trying to make the group more effective.

"We are not asking for military intervention, such as an invasion, but international protection, such as stopping Syrian planes," he said.

We are not asking for military intervention, such as an invasion, but international protection, such as stopping Syrian planes," he said.

The Syrian military has stepped up a military campaign to drive rebels out of Aleppo, the country's biggest city. Outgunned rebel fighters are facing much heavier weapons including helicopter gunships.

"When Aleppo is freed, we will have the northern part of Syria and will ask (the opposition) to return home," Maleh said.

The Council for the Syrian Revolution comprises 70 opposition figures and will be based in Cairo, with branches in Lebanon, Turkey, Jordan and Iraq.

"The movement includes members from the Syrian National Council yet its formation is meant to also tell the council that it is not the only body entitled to act on behalf of all the opposition," said Ahmed Jalal el-Sayed, one of its members.

Western and Arab states have for months been urging the Syrian opposition to unite. While the Syrian National Council has been an international voice for the opposition, activists on the ground have complained that the exiled leadership has little connection to what is happening in Syria.

Reacting to the formation of the new group, head of the Syrian National Council, Abdelbasset Seida, said: "The process of forming a transitional government is difficult and needs consultations with all members of the Syrian opposition, rebels and the Free Syrian Army."

"But if each group came out alone announcing the formation of a new government without talks and research, this would end up in having a series of weak governments that don't represent anyone and would not be able to mean or do anything," he told Reuters.

"Our end goal is to form a government that would represent and please all members of the Syrian community."