A French presidential source said the 40-minute meeting had been polite and courteous and centered on Iran's nuclear program, the crisis in Syria and neighbouring Lebanon. 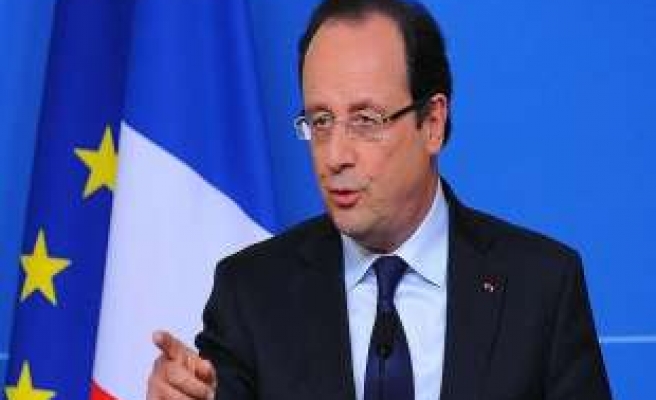 French President Francois Hollande became the first Western leader to meet new Iranian President Hassan Rouhani on Tuesday after warning that Paris expects "concrete gestures" by Iran to show it will give up a military nuclear program.

France has been a strong advocate of sanctions to pressure Iran over its nuclear program but has been cautious in its statements since Rouhani, a relative moderate, was elected.

Hollande, who exchanged handshakes with Rouhani at the United Nations - the first between leaders of the two countries since 2005 - told the U.N. General Assembly that while he was encouraged by the words of the new Iranian government, he now wanted acts to follow.

"France expects of Iran concrete gestures which will show that this country renounces its military nuclear program even if it clearly has the right to pursue its civilian program," Hollande said in an address before meeting with Rouhani.

"This is why I have made the choice to engage in direct and open dialogue with President Rouhani,"Hollande said. "But I will also say ... I am in favor of dialogue, but just as strongly I am firm on the issue of nuclear proliferation."

A French presidential source said the 40-minute meeting had been polite and courteous and centered on Iran's nuclear program, the crisis in Syria and neighbouring Lebanon, where Tehran has considerable influence over the Hezbollah.

"Compared to the previous administration there are signs, but the reality is that there are still hurdles to jump and progress to be made," the source said.

Since Rouhani was elected president, the centrist cleric has called for "constructive interaction" with the world, a dramatic shift in tone from the strident anti-Western and anti-Israeli rhetoric of his predecessor,Mahmoud Ahmadinejad.

The presidential source said that the talks did not go into details on the nuclear program, but that Rouhani had raised concerns about the economic sanctions on his country, suggesting Paris could immediately end sanctions on the automobile sector.

"They would like just through their words and with no real gestures for sanctions to be loosened. It's probably what they hoped for by meeting us. That was the main message. We told them that if there is progress on the nuclear dossier then the sanctions will fall by themselves," the source said.

Hollande also discussed the crisis in Syria with Rouhani, hoping to persuade Tehran to loosen its support for President Bashar al-Assad and accept the terms of the proposed "Geneva 2" peace conference that calls for a transitional authority in the civil war-torn country, something Iran has so far not backed.

The French source said that Rouhani had not tried to mix the Syria crisis with the nuclear dossier and told Hollande he wanted the war to end and was open to the idea of Geneva 2.

"On Syria it's not just resolving the chemical issue, but to go get to a political solution and we know that solution also goes through Tehran," the source said.

Hollande earlier told the U.N. that too much time had been wasted trying to end the 2-1/2 year civil war inSyria, which the United Nations says has killed more than 100,000 people.

"We must ensure that this war ends. It is the deadliest war since the beginning of this century. The solution is a political one and too much time has been lost," he said.

Hollande also repeated that he wanted a U.N. Security Council resolution that would keep close to the terms of a U.S.-Russia deal to eradicate Syria's chemical weapons.

In a clear sign of frustration with Moscow's continued stance, Hollande also called on the five permanent members of the Security Council to collectively drop their right to veto resolutions in cases that included crimes against humanity.