Israel resumed its airstrike on the Gaza Strip on Tuesday following the collapse of a temporary ceasefire with Palestinian factions. 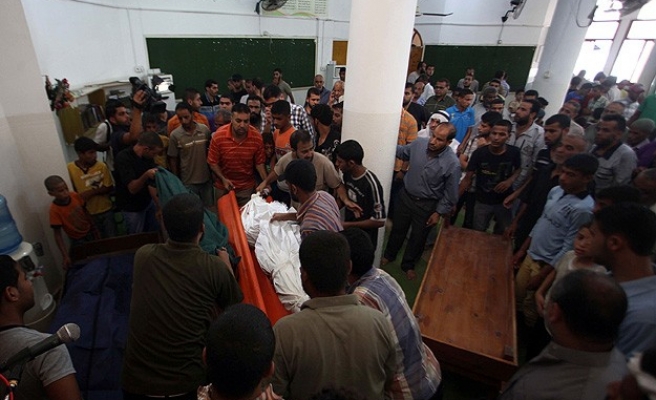 Four Palestinians, including an infant, were killed Sunday and 20 others injured in two fresh Israeli attacks on the Gaza Strip, the Palestinian Health Ministry said.

The attack also left Mohamed al-Khodari, 17, dead and five others injured, he added.

Two other Palestinians were killed and 15 others injured when the Israeli warplanes pounded a house in Deir al-Balah city in central Gaza Strip, he said.

The latest fatalities brought up to 2109 the number of Palestinians killed in Israeli attacks on the Gaza Strip since July 7.

According to al-Qodra, the fatalities included 566 children, 265 women and 99 elderly people. More than 10,600 Palestinians were also injured.

Israel launched more air strikes on Gaza on Sunday after taking its military campaign to a new level by flattening a 13-storey apartment tower following a warning to residents to evacuate.

It was the first time Israel had destroyed so large a structure in the Gaza war. The Israeli military said the building contained a command centre belonging to Hamas fighters, and that it had fired a non-explosive warning rocket on Saturday, 10 minutes before attacking.

Israeli Prime Minister Benjamin Netanyahu warned Gaza residents to leave any site where Palestinian fighters were operating, saying the locations could be attacked.

"I call on the inhabitants of Gaza to vacate immediately every site from which Hamas is carrying out terrorist activity. Every one of these places is a target for us," he said in broadcast remarks, a day after an Israeli air strike flattened a Gaza apartment tower.

Egypt called on Israel and the Palestinians on Saturday to halt hostilities and return to talks. But there was no sign that negotiations, last held before a ceasefire collapsed on Tuesday, would resume any time soon.

The United Nations says about 400,000 Gazans have been displaced in the longest and deadliest violence between Israel and the Palestinians since the second Intifada, or Palestinian uprising, a decade ago.

The Israeli army said that a total of 620 rockets had been fired at Israel from the Gaza Strip since the collapse of a temporary ceasefire deal with Palestinian factions on Tuesday.

At least 120 rockets were fired on Saturday and Sunday alone, it added in a statement.

The release, however, did not give details on the scale of damage left by the Gaza rockets.

Palestinian resistance faction Hamas has denounced the Israeli targeting of residential buildings in the blockaded Gaza Strip as a "war crime."

"The destruction of a residential building by the Israeli army – leaving dozens injured and families displaced – is a crime war," spokesman Sami Abu Zuhri said in a statement on Sunday.

"The attack came as part of Israel's collective punishment of Palestinian civilians," he said.

Israel resumed airstrikes in the Gaza Strip on Tuesday following the collapse of indirect, Egypt-hosted talks aimed at hammering out a durable ceasefire deal.

While Israel accused Palestinian factions of breaking a 5-day ceasefire with a rocket barrage, Hamas accused Israel of attempting to derail the truce talks in Cairo.

The relentless Israeli attack left at least 2105 Palestinians, mostly civilians, dead and more than 10,000 others injured since July 7, according to the Palestinian Health Ministry.

Meanwhile, the Israeli army delivered a "strong-worded warning" to the Lebanese army after a rocket was fired from southern Lebanon into the Upper Galilee, the Israeli radio reported.

No group has claimed responsibility for the rocket fire, but the Israeli army delivered a warning to its Lebanese army through the United Nations Interim Force in Lebanon (UNIFIL) that it considered Beirut responsible for any actions conducted on its territory.

The shelling came shortly after a rocket was fired from southern Lebanon into the Upper Galilee.

According to Yediot Aharonot, a rocket had been fired from the southern Lebanese Dheira, three kilometers from the border with Israel, into Upper Galilee.

The Israeli army also said Sunday that five rockets fired from Syria had landed on the Israel-held Golan Heights.

The five rockets were fired minutes after Saturday midnight and fell in an open area with no injuries reported, Avichay Adrae, the army spokesperson for Arab media, said on Twitter.

"Israel considers the Syrian regime responsible for actions conducted on its territory," he added.

Tension has been high in the region over a deadly Israeli offensive in the Gaza Strip, which killed at least 2103 Palestinians and injured more than 10,000 others since July 7.

The Golan Heights were occupied by Israel during the 1967 Arab-Israeli war.

In 1981, the self-proclaimed Jewish state formally annexed the territory.

The region is inhabited by a small Syrian Druze community of roughly 20,000.