'Friday of anger' in Egypt - LIVE

At least 127 people were killed in Friday clashes 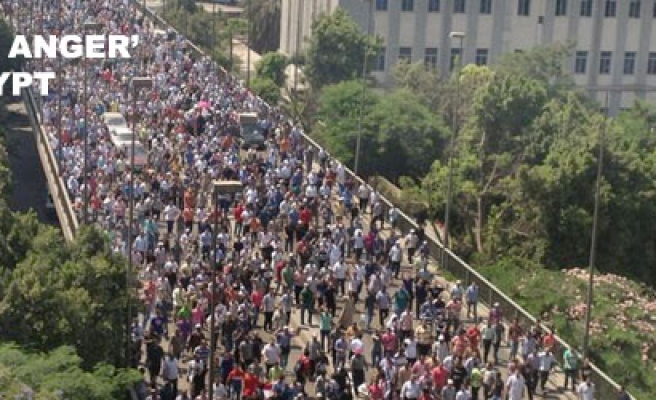 Supporters of ousted president Mohamed Morsi are staging a fresh wave of rallies in several Egyptian cities on Friday to protest Wednesday's violent dispersal of two major pro-Morsi sit-ins in Cairo and Giza.

Thousands marched from mosques in several areas of the capital toward Ramses Square in the capital's downtown district.,

"The people have risen up and won't back down until the Interior Minister [Mohamed Ibrahim] and Defense Minister [Abdel-Fattah al-Sisi] are hung in public squares," leading Muslim Brotherhood member and former lawmaker Mohsen Radi told supporters.

Protests are also being organized in several districts of Giza and 6 October City on the outskirts of Cairo.

Additional demonstrations are also being organized in the Nile Delta Kafr al-Sheikh province and the Red Sea province.

Six pro-Morsi demonstrators were killed when their rally came under fire in the canal city of Ismailia.

"We have six people, including a woman, shot with live ammunition," Ahmed al-Labban, director of a makeshift mobile field hospital, told Anadolu Agency.

"Four of them were dead on arrival and the other two are clinically dead," he added.

Eight protesters were killed in the Egyptian Mediterranean town of Damietta in clashes with security forces, medical sources said.

At least 30 anti-coup protesters were killed in Cairo's Ramses Square on Friday, according to medics at a makeshift field hospital inside the square.

More than 100 others had sustained gunshot injuries, medics at Cairo's Al-Fath Mosque said.

The Health Ministry has said that at least 638 people were killed in nationwide violence since Wednesday, including 288 in Rabaa and 87 in Nahda.