From astronaut to Syrian refugee in Istanbul

In 1985 Mohammad Faris was selected to join the Interkosmos training programme, for allies of the Soviet Union. Today he is one of highest ranking defactors from the Syrian regime, dedicating his life to helping refugees 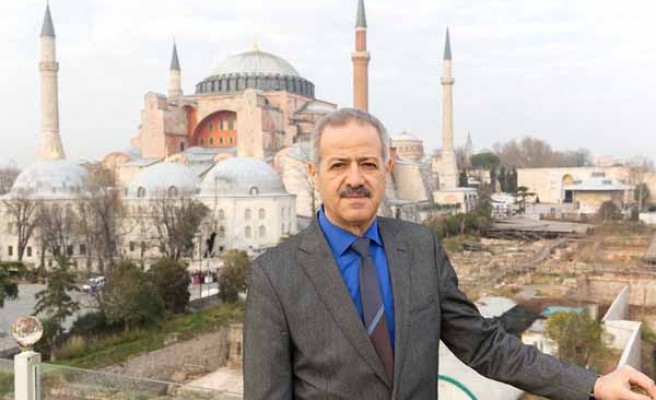 Mohammad Faris in Syria is a national hero, with a school, airport and roads named after him.In his office in Istanbul, hundreds of miles from his birthplace, Aleppo, he now campaigns for democratic change in Syria, “through words, not weapons”.

Selected from one of four out of 60 Syrian candidates at the Yuri Gagarin Cosmonaut Training Centre and made it down to the last four and Faris, the only Sunni was selected, with Russian overruling Hafez Assads delegation. Reflecting on his time in space,“Those seven days 23 hours and five minutes changed my life,” says Faris. With the other Russian astronauts, he carried out scientific experiments and photographed Syria from space. “When you have seen the whole world through your window there is no us and them, no politics.” While in space, Faris decided to quit the military and made a goal to educate his people in science and astronomy, “to pass on this privileged view I had been given”.

Faris had asked the then president to fund a national space science institute to help other Syrians to follow him into space. The answer was an emphatic “no”.

“He [Hafez Assad] wanted to keep his people uneducated and divided, with limited understanding,” says Faris. “That’s how dictators stay in power. The very thought of giving the people the vision that a space science institute would give them was dangerous.” Instead, Faris was given a position at the air force college, teaching hundreds of young men to fly jet fighters. He may have been Top Gun but Faris says his were “empty powers”.

As the head of Syria's air-force academy he became a military advisor, hoping he could enter into academia in 2011. But by then, the Arab spring was spreading across the region.

“When the protests started, they were nothing but peaceful, for months on end.” Faris says he and his wife joined in, marching in Damascus, and calling for peaceful reform. They were threatened by supporters of the Assad regime for doing so but did not stop. “These were my people, all of them are my people, our people,” he says. Faris and his wife discussed the protests directly with the leadership, calling on them to make gentle changes, but “they [the Assads] thought they were gods”.

Witnessing his former students being brainwashed into attacking their own people, and realising that he was making little headway, he secretly made plans to escape, making four attempts unsuccessfully before finally making it over the border into Turkey with his wife and three children. Today he remains one of the highest defactors of the regime.

His office in Istanbul is adorned with medals and till today he recevies invitations from Russia to attend conferences but he refuses until certain conditions are met, "They must stop their violence. The problem is I understand the way they think, unfortunately, so I cannot be their friend.”  He now advises the Turkish government about Syrian refugees’ rights  and is part of the Syrian National Coordination Committee for Democratic Change, an anti-violence, anti-Assad grouping that meets in Spain.

He has also declined offers from European NGO's to aid with asylum applications which also upset him as he is concerned he will be used for political gain. “They did not intervene when they were needed,” he says, referring to both European and US governments, “and they oppose my ideals, so I cannot live there.”

Despite all, he remains hopeful, referring to the strength of his people in his hometown of Aleppo, “The Syrian civilisation is 10,000 years old. It will survive this attempt by the Assads to destroy it. It has survived worse.” But now the city’s days may be numbered, and hope might be all that is left behind. “From afar, when the Earth was so small, I really felt in my heart I could make a big difference in the world,” he says. “It has not been easy.”