Assad troops as well as Hezbollah militia were using Han Asel to supply their northern forces as the town crosscuts the mainroad connecting Damascus to Aleppo. 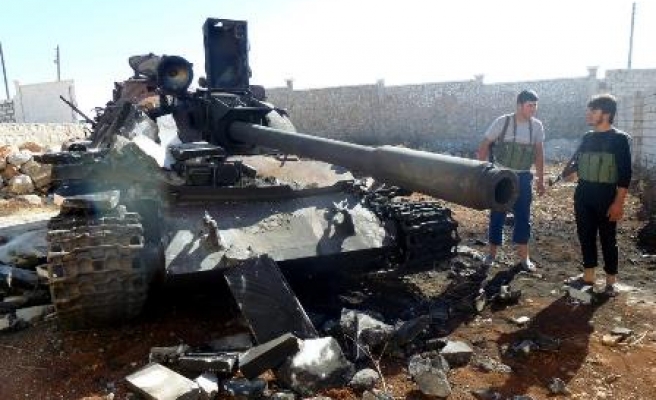 The Free Syrian Army (FSA) completely captured and took control of the Han Asel district of Aleppo, cutting off Assad's supply line to the Syrian city.

In March, Assad forces were claimed to have used chemical weapons in Han Asel, leaving more than 30 people dead.

Speaking to AA, Al-Ansar Brigade Commander Abu Shahood said "After the clashes, FSA Operations Unit decided to deliver the dead bodies to the families. We contacted the Syrian Red Crescent and called them in to the clash field to gather the bodies."

He argued that burying the dead is a humane situation, saying "At the last combat, 550 Assad soldiers died whose bodies are being returned to the regime to be given to their families."

Abu Shahood stated that they also seized 2 tanks along with several soldiers held captive after they took control of the region.

Armed opposition groups continue their efforts to cut off the supply lines of Assad forces based in northern Aleppo. The attacks of the Assad regime to recapture the regions it lost are interrupted as the FSA seized the control in Han Asel, connecting the south and north of Aleppo.

Assad troops as well as Hezbollah militia were using Han Asel to supply their northern forces as the town crosscuts the mainroad connecting Damascus to Aleppo.

Taking revenge for the capture of the Qusayr town of Homs by the Assad regime, the opposition forces drew closer to the sites of high importance for the regime forces such as the Aleppo Military Academy, where the regime is known to lead its operations from, Artillery School and Scientific Research Center.

Besides, there are several military build-ups of the Syrian regime reported in the region, along with the oil concentration used by the military forces in the region.

You have no shame. And why should you? We know for whom you work. Khan Al-Asal is not that important to our army. In any case, the army has launched a counter-offensive to take over this part of town which has been stripped of its population by your cannibal Islamist heroes. Can't wait to see one of your reporters in front of a camera before being beheaded by the great freedom fighters.