An Israeli air strike on the home of Gaza's police chief killed 15 Palestinians, the deadliest attack since Israel launched an offensive in the enclave five days ago. 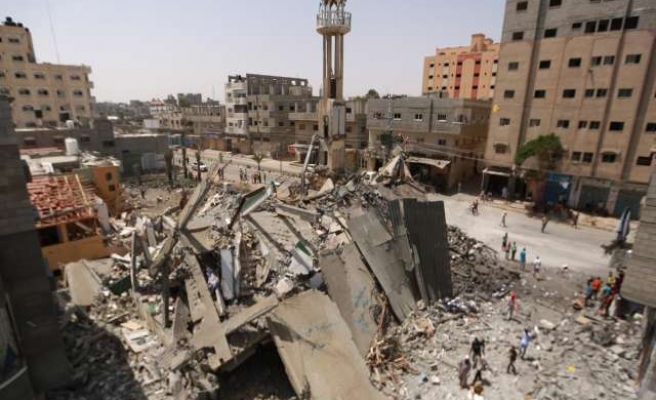 "Israelis F16s targeted al-Batsh's home in eastern Gaza with rockets, leaving 15 home residents dead and 40 others injured, including the police chief himself," the security source added.

He described al-Batsh's condition as "critical".

The Palestinian resistance movement Hamas late on Saturday described what happens in the Gaza Strip at present as an Israeli "aggression" against Palestinian civilians, not an "exchange of fire".

"The international community needs to not only bring about a ceasefire, but to also keep oppression away from the Palestinian people," Hamas spokesman Sami Abu Zuhri said in a statement.

British Foreign Secretary William Hague said earlier on Saturday that he would discuss means of bringing about a ceasefire in Gaza in a meeting scheduled to take place in the Austrian capital Vienna on Sunday on the Iranian nuclear file.

The British newspaper The Independent, meanwhile, reported that the U.S. administration is desperate for Arab allies who can mediate a speedy ceasefire in the Gaza Strip.

An Israeli source referred earlier to "many proposals" for a ceasefire to ongoing violence in Gaza.

He said, however, that the conditions have not become suitable for these proposals to evolve into a settlement on the ground yet.

The source told Israel Radio that Israel seeks to reach a long-term calm with Gaza, regardless of whether this calm can be reached via military or political means.

Israel has launched a military offensive – dubbed "Operation Protective Edge" – with the stated aim of ending rocket fire from Gaza.

They have fired hundreds of rockets since Monday, according to security sources.