Ekrema Sabri, head of the Supreme Muslim Council in Jerusalem, warned that the Israeli policies in the holy city would drive the city towards an uncontrollable cycle of violence. 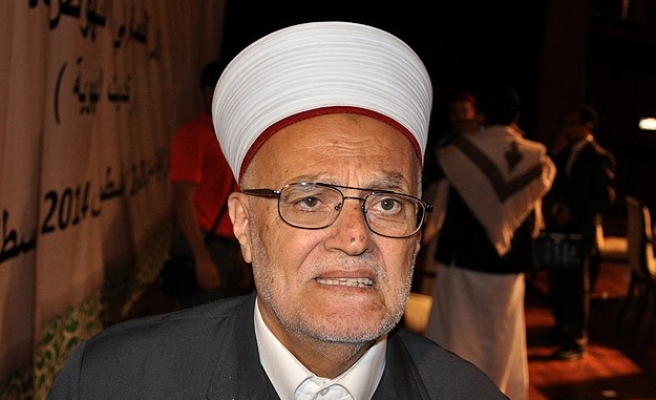 A renowned Palestinian scholar has warned that an Israeli government decision to ease restrictions on gun ownership in Jerusalem would trigger an "explosion" of violence in the holy city.

"The current situation in Jerusalem is flammable, and the stepped up army deployment and allowing settlers to carry guns would aggravate the already complicated situation," Ekrema Sabri, head of the Supreme Muslim Council in Jerusalem, a local NGO, told a press conference in East Jerusalem.

He also warned that the Israeli policies in the holy city would drive the city towards an uncontrollable cycle of violence.

"It is well known that consistent pressure leads to explosion," Sabri said.

"The Israeli occupation is treating citizens with the utmost brutality and arrogance, as if this [policy] would bring calm," he said.

The Israeli decision follows an attack earlier this week by two Palestinians on a West Jerusalem synagogue that left five Israelis dead.

The attack was the latest episode in an ongoing wave of upheaval that in recent months has engulfed Jerusalem and the rest of the occupied West Bank.

"The root causes of the tension remain unchanged," Sabri asserted. "Whoever wants genuine peace should [pressure] the Israeli occupation and not our people."

The ongoing turmoil in Jerusalem was initially triggered by the abduction and murder of a Palestinian teenager and Israel's subsequent 51-day onslaught on the Gaza Strip, in which over 2,160 Palestinians – the vast majority of them civilians – were killed.

Tensions mounted even further when Israel temporarily closed the Al-Aqsa Mosque complex in late October after an extremist rabbi was injured in a drive-by shooting in West Jerusalem.

Since then, a total of 11 Israelis have been killed and several others injured – including those killed in this week's synagogue attack – in a spate of assaults by Palestinians, both inside Israel and in the occupied territories.

"What is happening in Jerusalem is beyond anyone's capacity for patience," Hatem Abdel-Qader, the Palestinian Fatah movement official responsible for Jerusalem affairs, said at the press conference.

"Jerusalem residents are legitimately defending their own existence, and that of their holy sites, against the brutal, racist crimes committed against them by Israel," he declared.

"We will never accept Israel's restrictions and assaults on men and women at the Al-Asqa," Abdel-Qader said.