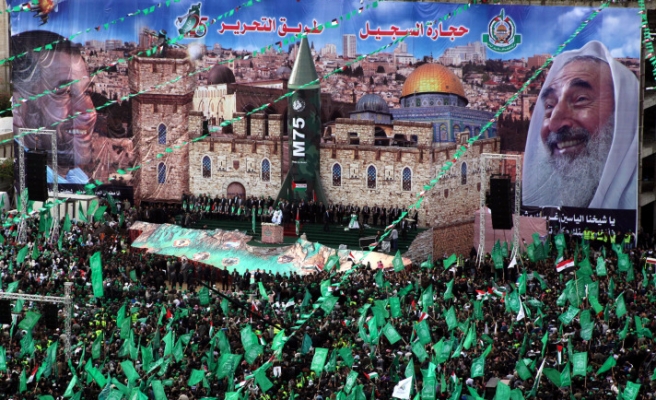 Hamas militants warned Israel for the first time, and in Hebrew, of an impending rocket attack, adopting psychological warfare with the Jewish state while trying to raise the morale of Gaza's Palestinians harder hit by Israeli bombardment.

Around 160 Palestinians in the tiny overcrowded enclave, most of them civilians, have been killed in six days of conflict while Israel has reported no dead.

On Hamas's Al-Aqsa TV at eight in the evening Saturday, the voice of Abu Ubeida - the perpetually masked and camouflaged spokesman of the group's armed wing - broadcast a warning.

"(We) will direct a military strike with rockets at the Tel Aviv area and its surroundings with a J80 rocket after 9 P.M."

Audio of the threat in Hebrew followed, and Israeli television stations immediately picked up the news.

At seven minutes past nine, a series of thunderous roars in the coastal territory signalled the outgoing rockets. Warning sirens promptly sounded in the greater Tel Aviv region, the heavily populated heart of the Jewish state.

"Our rockets have struck Tel Aviv!" the loudspeaker of a Gaza mosque blared. The roars of men and boys arose from the windows of houses: "God is Great!"

No rocket actually hit Tel Aviv. They were either shot down by Israel's Iron Dome anti-missile interceptor or fell harmlessly on open ground. But that did not matter in Gaza.

Hamas has also posted a Hebrew version of one of its battle songs in the latest act of psychological warfare.

That no one in Israel has been killed in the attacks has been dismissed as a lie by Hamas-run media, and the Palestinian public appears to agree.

Hamas and many residents say telephoned Israeli warnings of impending air strikes on houses, many of which it has not acted upon for days, is part of its own campaign to demoralize Gaza.

The Gaza interior ministry on Sunday dismissed as "psychological warfare" Israeli leaflets dropped in border areas urging people to evacuate ahead of a possible ground invasion.

Israeli television stations broadcast live images of the Tel Aviv skyline on Saturday and showed the promised rockets blown up in mid-air by the military's Iron Dome umbrella.

Beachfront cafes in Israel's commercial capital erupted with cheers at the images. At a concert by the Israel Philharmonic Orchestra, an announcement just before the start of the show told people to wait in their seats until the sirens ended.

Gaza families, on the other hand, are mostly house-bound for fear of the Israeli bombs. They tune in for hours to local TV's pulse-quickening coverage, blending the gory aftermath of Israeli air strikes with bulletins of triumphs in battle.

It broadcast wrenching footage of a slain four-year old's father shaking his lifeless little body, crying, "My son, wake up! I've bought you a toy!"

Saturday's rocket warning did bring about a rare but fruitless exchange between the purveyors of news on the two sides. Israel's Channel 2 and Hamas's Al Aqsa carried live feeds of each other's broadcasts, the first to publish the warning, the latter to view the reaction.

"Can we talk?" the Israeli anchor asked his counterpart.

"We'll continue to broadcast Palestinian strength. There can be no dialogue between Palestinians and the Zionist occupation," the Palestinian anchor sniped back through a translator.

One of the preceding warnings to Gaza people directed them to a "safe" location; which subsequently was bombed resulting in a large number of women and children being killed.