Violence raged in the Palestinian territories on Tuesday after Israel launched a major military offensive – dubbed "Operation Protective Edge" – with the stated aim of staunching rocket fire from Gaza. 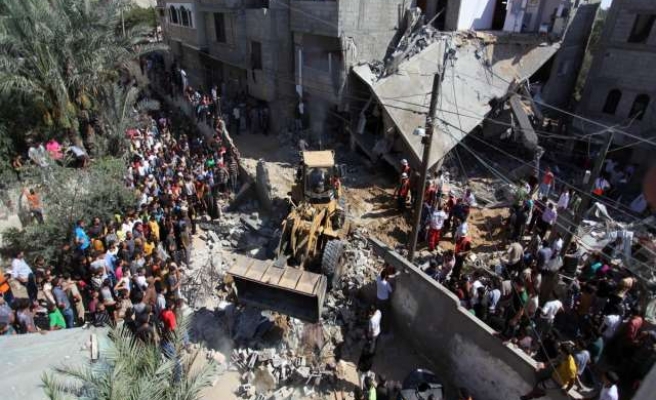 At least 20 people were killed across Gaza on Tuesday, Palestinian officials said, by a bombardment Israel said may be just the start of a lengthy offensive against Hamas whose rockets reached hit unprecedented depths of its interior.

Israelis ran for cover as air-raid sirens sounded in the business capital Tel Aviv and the holy city of Jerusalem, both of which were hit in the previous Gaza war of November 2012.

Hamas said it also fired at rocket at northern Haifa, 140 km (88 miles) away, and though this was not confirmed Israel said a rocket had landed in Hadera, 100 km (60 miles) from Gaza - further than had previously been reached.

In densely populated Gaza, explosions echoed day and night, shaking buildings and sending up plumes of smoke. At least 12 civilians, including five children, were among the 20 dead, Palestinian officials said.

At least 38 Israelis were injured in Palestinian rocket attacks, Israel's national emergency service Magen David Adom said Tuesday. The medical service said on its Twitter account that six people were lightly hurt and 32 others were treated from panic from Palestinian rocket fire.

"We will not tolerate rocket fire against our cities and townships, and therefore I ordered a significant broadening of IDF (Israel Defence Force) operations against the terrorists of Hamas and other terror groups in the Gaza Strip," Prime Minister Benjamin Netanyahu said in a statement.

He called on Israelis to rally together and "show resilience, because this operation could take time".

Israel has threatened to invade Gaza if the rockets persist.

In a bold infiltration, gunmen from Hamas landed on the shore near Zikim, where a kibbutz and an army base are located, just over the Gaza border. Israel's army initially said it killed five gunmen, but later put the death toll at four.

U.S.-backed Palestinian President Mahmoud Abbas, who is based in the Israeli-occupied West Bank and entered a power-share with Hamas in April after years of feuding, said he had spoken to regional powerbroker Egypt about the Gaza crisis.

Under President Abdel Fattah al-Sisi, Cairo has tightened closures on the Egyptian-Gaza border, increasing economic pressure on Hamas from a long-running Israeli blockade.

"Sisi stressed Egypt was interested in the safety of the Palestinian people in the Gaza Strip and sparing this grave assault," a statement from Abbas's office said, adding that Cairo would "exert efforts to reach an immediate ceasefire".

Washington backed Israel's actions in Gaza while the European Union and United Nations urged restraint on both sides.

"We strongly condemn the continuing rocket fire inside of Israel and the deliberate targeting of civilians by terrorist organisations in Gaza," White House spokesman Josh Earnest said.

"No country can accept rocket fire aimed at civilians and we support Israel's right to defend itself against these vicious attacks."

The surge in violence along the Gaza border - the worst since an eight-day war in 2012, when Tel Aviv was also targeted - followed a chain of events begun by the abduction of three Jewish seminary students in the occupied West Bank on June 12.

Blaming Hamas, which neither confirmed nor denied a role, the Israelis arrested hundreds of its activists in their search for the teenagers who were eventually found dead, as was a Palestinian youth abducted in Jerusalem last Wednesday in a suspected revenge murder.

Palestinians have since launched more than 200 rockets from Gaza, Israel says.

While threatening an "earthquake" of escalation against Israel, Hamas said it could restore calm if Israel halted the Gaza offensive, recommitted to a 2012 Egyptian-brokered truce and freed prisoners it detained in the West Bank last month.

"The enemy must not think about enjoying security unless these terms are met," the Hamas armed wing spokesman said.

The Israeli military said on Tuesday that, to support regular forces, it had called up 1,000 reserve troops out of a pool of 40,000 approved on Tuesday by the security cabinet. Some 1,500 other reservists have already been mobilised.

One Israeli attack overnight destroyed the house of a Hamas member's family, killing six people inside, locals said. The Palestinian Interior Ministry said the family had received a telephone call from an Israeli officer telling them to leave.

Locals said people had been urged to gather there as "human shields" to deter a second attack after it was hit earlier.

Another strike killed a Hamas commander, identified as Mohammed Shaaban, and three others travelling in a car together, a pro-Hamas website said.