Qassam Brigades said earlier that it would target Tel Aviv, news channels broadcast the rockets flying in the sky live 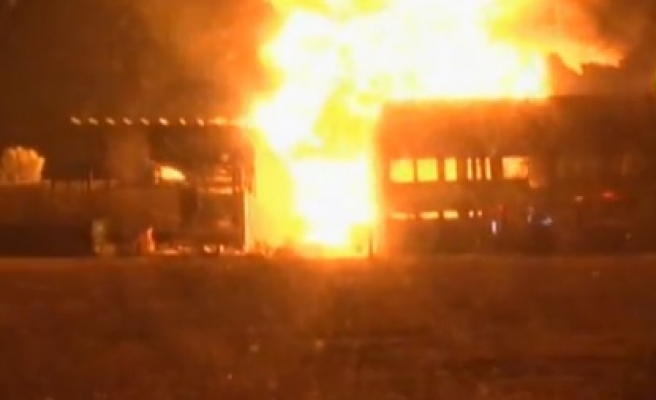 Qassam Brigades, the military arm of the Palestinian resistance movement Hamas, said on Saturday that it fired rockets on the Israeli capital Tel Aviv in the light of a warning a short time earlier.

News channels broadcast the rockets flying in the sky over the Israeli capital live.

Israel's channel 10 broadcast a rocket falling down in Tel Aviv, but it did not say whether the rocket attack had caused any human or material damage.

The brigades said earlier that it would target Tel Aviv with J80 rockets after 18:00 GMT.

Some Israeli channels, meanwhile, conducted interviews with ordinary people, exploring their worries as far as the imminent rocket attacks are concerned.

Even with this, Israeli army spokesman, Moti Almoz, told Channel 10 that Qassam's threats would not frighten the Israeli society.

He said the Israeli army would continue to respond to rocket attacks from Gaza through operations on the coastal Palestinian enclave.

The same channel quoted Israeli military officials as saying that their country's Iron Dome defense system would be able to intercept any rockets coming from Gaza.

In making its warning earlier on Saturday, Qassam Brigades asked Israeli civilians living in the capital to practice caution.

Three rockets aşso fired from Lebanon on the western part of the northern Israeli region of Galilee, an Israeli military source said.

The source told Israel's channel 10 that the rockets fell in an open area, leaving no casualties behind.

He said the rockets were most likely fired by some Palestinian factions or "radical" religious movements.

The Lebanese government has not commented on these claims yet.

The Israeli army, meanwhile, said two missiles were fired from Lebanon late on Saturday as well and fell in an empty area in Israel's northernmost coastal city of Nahariya.

No casualties were reported from this rocket attack either.

However, army spokesman Peter Lerner said the Israeli army had responded to the source of the rocket attack.

On Friday, northern Israel was subject to a rocket attack from Lebanon as well, the Israeli army said.

Israel responded to the attack by launching 25 missiles on a Lebanese village. No casualties were, however, reported from the Israeli reaction.

Meanwhile, armed men on Saturday shot down an Israeli drone flying over the western part of the Gaza Strip, a security source said.

The source, who asked not to be named, told Anadolu Agency that armed men from Qassam Brigades managed to shoot the drone down, using an anti-aircraft missile.

He added that the armed men also seized the drone, which fell down in southwestern Gaza.

Anadolu Agency could not immediately obtain comments from Israeli authorities on the account of the security source.

This is the second Israeli drone to be shot down by Palestinian resistance fighters.

On Tuesday, a resistance movement called Mujahedeen Brigades managed to shoot down an Israeli drone in western Gaza.

At least 160 Gazans, mostly civilians, have been killed and hundreds injured since Monday in a series of Israeli airstrikes.