Al-Ramouni, 32, was found hanged inside a bus in West Jerusalem 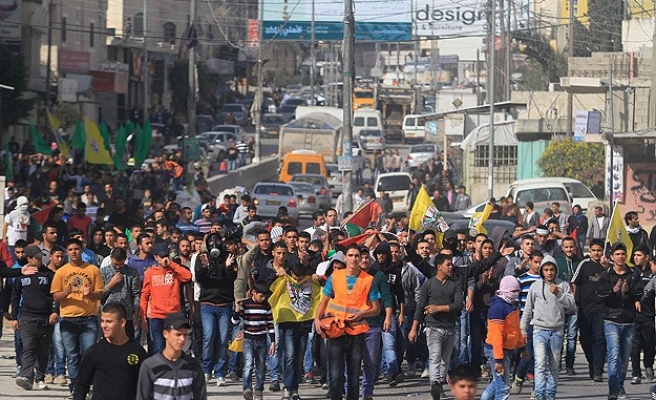 Thousands of Palestinians on Monday laid to rest a Palestinian driver who was found hanged in an Israeli bus late Sunday.

Mourners vowed to avenge "Israeli crimes" against the Palestinians.

Eyewitnesses said Palestinians clashed with Israeli forces in Abu Dis, a neighborhood of East Jerusalem where the young driver was buried.

Youssef Hassan al-Ramouni, 32, was found hanged inside a bus in West Jerusalem late on Sunday.

His body was taken to Hadassah Medical Center for the Israeli authorities to identify the cause of death.

Citing the results of an autopsy, Israeli police spokesman Micky Rosenfeld said the incident was not criminal.

"Findings from autopsy on the Arab bus driver showed that his death was not caused by criminal action," Rosenfeld told Anadolu Agency.

Al-Ramouni's family, however, believes he was killed by Jewish settlers.

Some Palestinian local media outlets had published photos of the body showing signs of bruises and cuts on the back, abdomen and face.

A spokesman of the Palestinian faction Fatah in Jerusalem also said that bruises found on the back and the face of a Palestinian driver, who was found dead in West Jerusalem late on Sunday, proved that the driver was killed by Jewish settlers.

"We have proved this by examining his body where bruises on the back and the face were clear," he added.

Badr said the driver's body was found in an area full of security cameras and Israeli policemen, noting that settlers only could enter this area.

"The doctors who examined al-Ramouni's body also emphasized that he was killed," Badr said.

He demanded international protection for the Arab residents of Jerusalem, warning against the eruption of further violence in the region against the background of repeated Israeli violations in Jerusalem and its holy sites.

Tension has already been running high in the occupied Palestinian territories since Israeli authorities sealed access to the Al-Aqsa Mosque complex in occupied East Jerusalem after the shooting of an extremist Jewish rabbi in the city before reopening it hours later.

The unrest mounted further after Israeli forces killed a young Palestinian suspected of shooting the rabbi in a raid on his East Jerusalem home.

Several Israeli lawmakers have stormed the mosque complex in recent days, drawing the ire of Muslim worshippers and official condemnation from Arab and Muslim countries.