Israel attacked the group in 2006 that that cost Lebanon a heavy civilian toll but failed to defeat its guerrilla force on the ground. 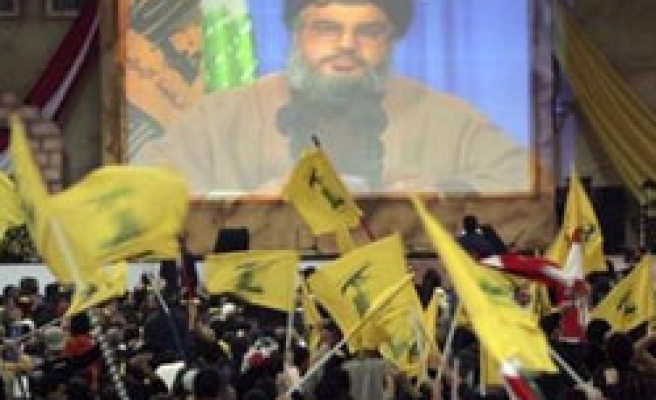 Hezbollah chief Sayyed Hassan Nasrallah said on Thursday he had been informed that members of his group would be charged by a U.N. tribunal investigating the 2005 killing of Lebanon's former prime minister Rafik al-Hariri.

"I was personally informed by Prime Minister Saad Hariri before his visit to Washington (in May) that the tribunal will accuse some undisciplined members" of Hezbollah, Nasrallah said in a press conference via video link.

"That's where things seem to be heading," he said, adding that the impending decision by the UN-backed court set up following the 2005 assassination of Hariri's father, Rafiq, had pushed Lebanon into a "very sensitive phase".

His rare press conference came amid reports that the Hague-based Special Tribunal for Lebanon was set to implicate the powerful Shiite party.

"There is no doubt that both of us would be in a difficult position (if Hezbollah members were indicted)," Nasrallah said.

Nasrallah said Saad Hariri, who he described as a caring man, had assured him he would publicly avow that it was undisciplined members of Hezbollah, and not the party itself, who were implicated in the murder.

"The accusation is heading towards members who they tell us now are undisciplined members of Hezbollah -- two or three. I don't even accept half of a Hezbollah member (being accused)," Nasrallah said.

Media reports have said the tribunal may issue its first indictments in September or October.

"There is a dangerous project that is targeting the resistance," Nasrallah added, using the standard Lebanese term for Hezbollah.

"We are not at all afraid, nor are we worried. We know how to defend ourselves."

He said that, from the outset, he had doubted the impartiality of the tribunal, which he accused of having made the decision to indict Hezbollah before conducting its probe.

"All the data we have indicate that the charge sheet was written up before even the interrogation of our members," he said. "The indictment is ready ... it is only a matter of political timing."

Hariri and 22 others were killed in a massive bombing on the Beirut seafront on February 14, 2005.

The assassination sparked an international outcry and led to the withdrawal of Syrian troops from Lebanon after a 29-year presence.

The Hariri murder has been widely blamed on Syria but Damascus has consistently denied involvement.

He said Hezbollah had additional doubts over the tribunal because it had dismissed any possible involvement by Israel.

"As long as the probe does not look into the possibility that Israel is implicated, we believe it is biased," he said. "Never has the investigation considered the hypothesis that Israel had the means and the motive to assassinate Hariri."

"As long as it didn't work on Israeli (involvement) then it's not an honest tribunal. Therefore any decision it takes is not based on an honest investigation," he said.

Israel attacked the group in 2006 that that cost Lebanon a heavy civilian toll but failed to defeat its guerrilla force on the ground.