Egyptian Health Ministry's account on death tolll has been increased to 525 but protest organizers claim at least 2,600 people were killed in the bloody clamp down on pro-democracy groups. 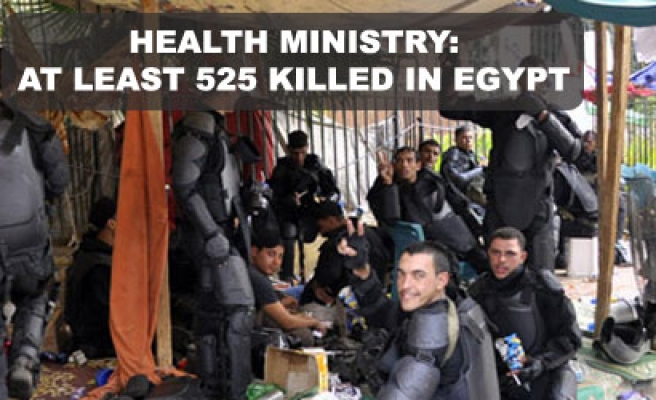 The Egyptian Health Ministry said Thursday that at least 525 people had been killed in the violence that gripped the country one day earlier.

"The number of people killed in clashes in Cairo and other [provinces now stands at 525," ministry spokesman Mohamed Fathallah said in a statement.

Among those killed were 202 people in Cairo's Rabaa al-Adawiya Square and 87 in Giza's Nahda Square, the sites of two major sit-ins by supporters of ousted president Mohamed Morsi, he added.

Both protest sites were violently dispersed by Egyptian police on Wednesday.

According to Fathallah, at least 29 people were also killed in the Cairo district of Helwan, along with another 207 in different provinces throughout Egypt.

At least 3,717 people were injured in clashes that followed the forcible dispersal of the two protest sites, the spokesman added.

However, the official death toll remains far below figures given by the National Alliance for the Defense of Legitimacy, a coalition of pro-Morsi Islamist parties and figures, which has put the number of deaths from the dispersal of the Rabaa al-Adawiya sit-in alone at some 2,600.