Many residents fled their homes as the fighting intensified, shattering three days of calm in the capital after Saleh ordered a ceasefire upon his surprise return to Yemen on Friday. 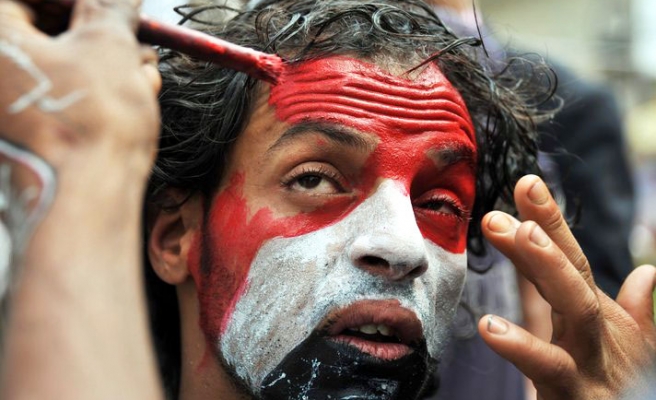 A Reuters reporter at the scene said shelling and gunfire had engulfed three areas in north Sanaa as troops battled armed followers of powerful tribal leader Sadeq al-Ahmar, who supports opposition demands for an end to Saleh's 33-year grip on power.

A doctor tending to the casualties said two people had been killed and six wounded in the violence.

Many residents fled their homes as the fighting intensified, shattering three days of calm in the capital after Saleh ordered a ceasefire upon his surprise return to Yemen on Friday.

"I only returned to the streets two days ago after clashes stopped, but I'll stick today to the south of Sanaa because it's safer," said ice-cream vendor Abdullah al-Wasabi. "We're tired of this crisis and we're losing our business, while these tribes and the president's soldiers don't tire of fighting."

The truce had calmed a week of fighting that killed more than 100 people and revived fears that Yemen, which borders top oil exporter Saudi Arabia, would tip into civil war.

In the war-torn northern governorate of Saada, which borders Saudi Arabia, aid group Medecins Sans Frontieres (MSF) said it had been forced to suspend its activities on Monday after local authorities imposed new conditions on humanitarian organisations operating there.

MSF said the conditions, which included a ban on international staff supervising operations, would "greatly affect" its ability to guarantee the quality and effectiveness of its work. "We had no choice but to suspend our activities," it said in a statement.

Until last week, Saleh had been recuperating in Riyadh from a June assassination attempt. Western diplomats had pressed him to stay in Saudi Arabia while they struggled to push through a long-stalled power transition plan to defuse the Yemeni crisis.

The president has hung on in the face of nationwide protests that drew strength from popular revolts in Egypt and Tunisia.

Former Saleh allies, such as Ahmar and Ali Mohsen, a general who defected to the opposition in March, have deserted him. The conflict has divided Sanaa into warring zones of influence.

Thursday's fighting pitted Ahmar's tribesmen against state security forces and troops from the elite Republican Guard, commanded by Saleh's son. It was unclear how the battle flared.

During the lull politicians and diplomats had scrambled to revive a Gulf-brokered plan under which Saleh would stand down. Gulf nations and Western powers have been exasperated by Saleh's repeated last-minute refusals to sign agreed transition deals.