The leader of Lebanon's powerful Hezbollah group called for political support and talks on a U.N. investigation into the killing of former PM Rafik al-Hariri. 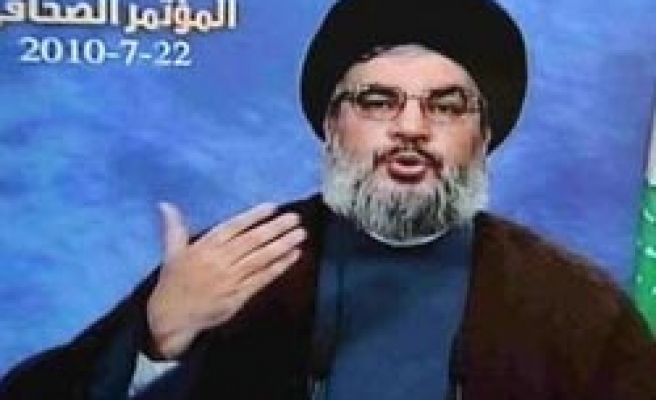 The leader of Lebanon's powerful Hezbollah group on Sunday called for political support and talks on a U.N. investigation into the killing of former prime minister Rafik al-Hariri.

"What do we suggest? Form a Lebanese commission, or parliamentary or judicial or ministerial or security commission to summon the witnesses ... to ask them: Who led you? Who taught you? Who fabricated this for you?" Sayyed Hassan Nasrallah said.

Nasrallah said the United Nations tribunal, which he has condemned as an "Israeli project", was likely to issue several waves of indictments against Hezbollah, which has denied any involvement in Hariri's 2005 assassination, Reuters said.

“Accusations are being invented against our party... There are a lot of preparations being made against Lebanon and the resistance,” Hassan Nasrallah said in a broadcast speech, using the standard Lebanese term for Hezbollah.

“If the cabinet or the national dialogue committee meets to discuss the issue, we will support that,” he said.

“There is something being prepared (against Hezbollah). So we must together consider how to confront it, how to deal with this matter,” Nasrallah added.

“We will not allow anyone, however important, to affect the dignity of the resistance, something very close to our hearts.”

He expected many members of his party would be indicted by U.N. investigation.

"We are the ones against whom the accusation is made, and it's not three (members)," Nasrallah said.

"A few days ago Lebanese security officials said the first indictment would be three, then after a while five, then the third (group) 20 and the fourth 50," he told a Hezbollah gathering by video link.

President Michel Suleiman held four days of talks last week with political leaders to try to calm tensions, which echoed the deep divisions which led the country to the brink of renewed civil war in 2008.

In a rare news conference on Thursday, Nasrallah said Prime Minister Saad Hariri, son of the slain ex-premier, told him months ago that Hezbollah members would be accused by the UN-backed court tasked with trying Hariri’s alleged killers.

He said Hariri had also assured him that he would publicly avow that it was “undisciplined” Hezbollah members, and not the party itself, who were implicated in the killing.

In his latest attack on the U.N. tribunal, Nasrallah said investigators had not even tried to find out why several witnesses changed their testimony.

Evidence from one witness, Hosam Taher Hosam, initially implicated officials from Syria but he later withdrew his testimony. The reliability of another, Syrian witness Mohammed Zuhair al-Siddiq, has been questioned.

Nasrallah said the fact that the U.N. investigation had not established why the witnesses changed their minds, or who might have been behind their original testimony, showed it was "not qualified to find the truth".

Last year the chief U.N. tribunal judge released four senior, pro-Syrian Lebanese officers after they had been held for four years without charge, saying that several witnesses had modified or retracted their original statements.

The U.N. investigation into Hariri's killing first implicated Syrian and Lebanese officials, although it later held back from giving details of its findings.

Hariri on Saturday called for “calm” in Lebanon in the face of “attempts... to organise campaigns aimed at sowing confusion and concern in the minds of the Lebanese people.”

Politicians and judges, including tribunal president Antonio Cassese, have said they expect an indictment by the end of 2010, sparking fears of a repeat of the violence that in May 2008 brought Lebanon close to a new civil war.