"These countries must know ... that they have given legal cover to Israel for any aggression against Lebanon. Why? Because Israel can then say 'We are waging war on terrorism'," Nasrallah said in a televised speech. 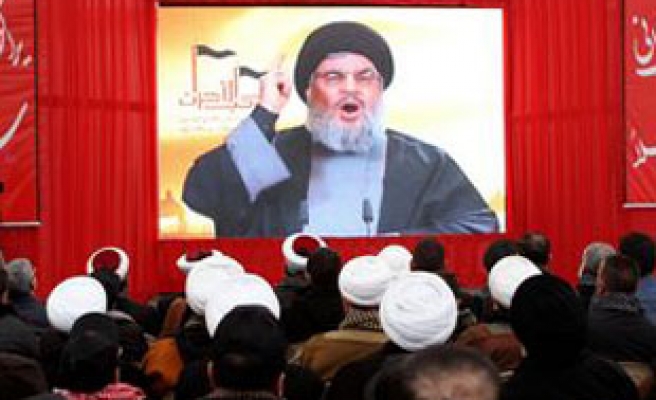 Hezbollah leader Sayyed Hassan Nasrallah said on Wednesday the European Union had given Israel justification to attack Lebanon by blacklisting the armed wing of his group, and would bear responsibility for any Israeli military action.

The bloc agreed earlier this week to list what it described as the military wing of the Lebanon-based group as a "terrorist organisation", in response to a deadly bus bombing in Bulgaria last year and Hezbollah's role in Syria's civil war.

"These countries must know ... that they have given legal cover to Israel for any aggression against Lebanon. Why? Because Israel can then say 'We are waging war on terrorism'," Nasrallah said in a televised speech.

"These countries have made themselves a full partner in responsibility for any Israeli aggression against Lebanon," he said in the speech delivered by video link from an undisclosed location.

Nasrallah has been living in hiding, for fear of assassination, since his group fought an inconclusive month-long war with Israel in 2006, triggered by Hezbollah's cross-border attack on an Israeli frontier patrol.

He said the EU move would have no practical effect on Hezbollah itself, laughing off the impact of any travel ban and dismissing any attempt to freeze Hezbollah funds.

Hezbollah, he said, had no money in banks - "neither as a party nor as individuals" - and no trade interests, investments or companies in Lebanon or abroad that could be affected by such measures.

"The aim of this decision is to subdue us, force us to retreat ... to fear. But I say to you that through this decision you will achieve only failure and disappointment," he said.

"Anyone who thinks that a resistance group that confronted the strongest army in the region for 33 days ... would submit to a stupid decision is delusional and ignorant."

Hezbollah denies any involvement in last July's attack in Bulgaria, in which five Israelis and their driver died, and says the European Union surrendered to U.S. and Israeli pressure. The Bulgarian interior minister said last week Sofia had no doubt the group was behind the attack.

In support of its bid to impose sanctions, Britain also cited a four-year jail sentence handed down by a Cypriot court in March to a Hezbollah member accused of plotting to attack Israeli interests on the island.

Hezbollah has a dozen members of parliament and two ministers in Lebanon's caretaker cabinet, as well as thousands of armed fighters. But it says it is a unified movement and makes no distinction between military or political wings.

EU diplomats have not specified which elements of Hezbollah would be targeted by the decision, nor whether Nasrallah himself is considered part of Hezbollah's military or political operations.