Homs is pawn in Syria talks amid reports of starvation

Some 2,500 civilians trapped in rebel-held Old City as each side makes demands, leaving aid agencies in quandary 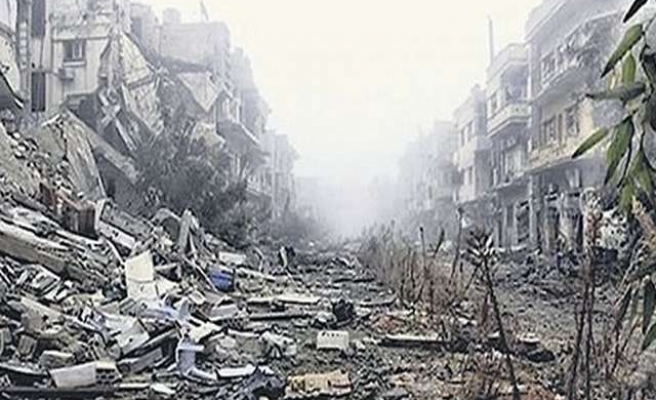 Some 2,500 Syrians trapped in the besieged Old City of Homs have become pawns in complex negotiations between the Syrian government and opposition, with aid agencies caught up in an ethical dilemma amid reports of starvation.

U.N. mediator Lakhdar Brahimi, who ran week-long talks that ended without progress on Friday, had hoped to broker a deal paving the way for delivering food and medical supplies to rebel-held Homs and the evacuation of women and children.

But each side made demands preventing a breakthrough and putting U.N. agencies, the Syrian Arab Red Crescent (SARC) and the International Committee of the Red Cross (ICRC) in an untenable position.

"It is hugely complicated. There was no quick win this week," a U.N. official told Reuters on condition of not being identified.

The government delegation of President Bashar al-Assad has said that women and children may leave the Old City, but that the names of men must be given before men are allowed to exit, according to Brahimi, calling it a "precondition".

The demand has raised alarm bells at U.N. agencies and the Red Cross and Red Crescent, since activists say men evacuated under a previous deal, in the besieged town of Mouadamiya, were immediately arrested by Syrian intelligence.

"It has the potential to be a sanctioned massacre," the U.N. official said of the dilemma over Homs.

"Women would be under pressure not to leave, and if they have to give the names of their husbands or fathers left behind, it would be a death sentence."

Under international humanitarian law, all sides to a conflict must allow civilians in besieged areas to leave for safer areas, on a voluntary basis. They must also protect civilians who stay behind and ease the safe passage of aid.

The Syrian opposition says the government's offer would force women and children to become homeless in return for food.

"Representatives of both sides continue to work out how to get aid into Homs Old City and evacuate women, children and the elderly. This must happen immediately," she said.

A U.S. State Department spokesman, referring to the Homs siege earlier this week, said: "We've seen the regime do this before, as part of its despicable 'kneel or starve' campaign."

The Syrian Arab Red Crescent - whose volunteers deliver most aid for the U.N. and other agencies in Syria - said on its Facebook page this week that it was ready to help in line with its principles of neutrality but also voiced some reservations.

"We also believe that getting women and children out is not the best solution since it does not include all the civilians and its breaks up the families and might increase pressure on the civilians left inside," it said.

Syrian Foreign Minister Walid al-Moualem told reporters after the talks wound up on Friday: "Three times there were attempts to allow civilians to leave Old Homs and the Red Cross failed.

"What delayed the dispatch of those shipments is one of main leaders of the opposition in Old Homs threatening (that) if shipments of convoys enter, they will open fire. Their demand is not shipment of supplies, what they want is to leave with their weapons, with the civilians through a safe corridor to another village," Moualem added.

The opposition says it has given the United Nations all necessary guarantees and access is entirely up to the government.

Dibeh Fakhr, ICRC spokeswoman in Geneva, said that the ICRC had not had access to the Old City of Homs since November 2012.

"Since then, and despite our many attempts, we never managed, together with SARC, to get the necessary authorisation and guarantees from all parties involved to access the Old City in order to bring in much-needed assistance and look into potential evacuation of civilians who would have expressed their wish to leave," she told Reuters on Friday.

Brahimi, speaking to reporters on Thursday, admitted that the issue of access to Homs was thorny.

"What goes first, do you get supplies in and then allow people to come out? Or get people out first and then see about getting aid in? This is unfortunately civil war," he said.

Brahimi, a former foreign minister of Algeria, was asked last Sunday whether he feared a repeat of Srebrenica in Bosnia.

Some 8,000 Bosnian Muslim men and boys ordered for security reasons to leave a U.N. peacekeepers compound in 1995 were killed when Bosnian Serb forces overran the U.N.-designated "safe area" it and separated Muslim men from women. The men and boys were then bussed to execution sites.