Nearly 700 bodies are reported to still be buried under the rubble after a number of barrel bomb attacks by the Syrian regime. 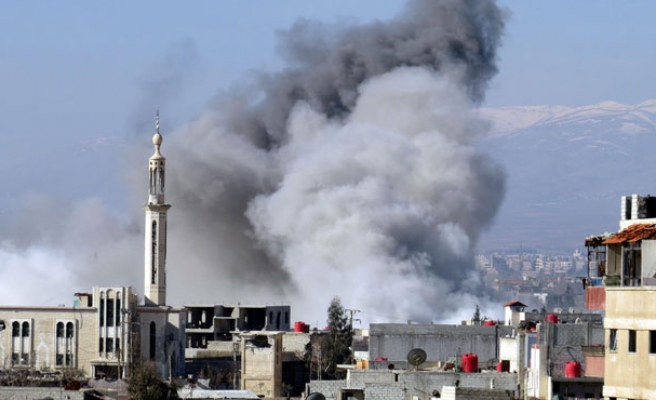 Nearly 700 Syrians are buried under the debris in the city of Aleppo after a month of barrel bomb attacks by the Syrian regime forces, civil defense official, Abu Abdurrahman told AA on Wednesday.

Fifteen were killed on Tuesday, including women and children, when a barrel bomb hit a four-story building in Muyassar, Aleppo.

Syrian Network for Human Rights (SNHR) claimed last week that forces loyal to the Syrian leader Bashar Assad have killed nearly 4,000 people with barrel bombs during the course of the ongoing civil war.

Abdurrahman, who works with rescue operations in Muyassar, said that the defense teams rely on heavy machinery and manual labor to recover the bodies, but are limited by their means.

"We are struggling to reach those under the ruins, but we don't have the means. And regime forces carry out 10 barrel bomb attacks in Aleppo every day. How are we to manage all of them?"

Barrel bombs are oil drums packed with explosives and sharp pieces of metal and concrete to enhance the destructive power. They are cheaper to make than missiles and more deadly, according to a report published last week by London-based SNHR.

The report claimed that regime forces have over the months used more than 2,250 bombs, while 97 percent of the victims were civilians. The bombs are dropped from helicopters, making them harder to shoot down.

An opposition commander from the Free Syrian Army (FSA) argued last week that the regime was trying to "change the demographics of the area by killing people, and the survivors are forced to migrate."

More than 100,000 people have died in Syria’s three-year war, and there are 2.5 million refugees in neighboring countries.