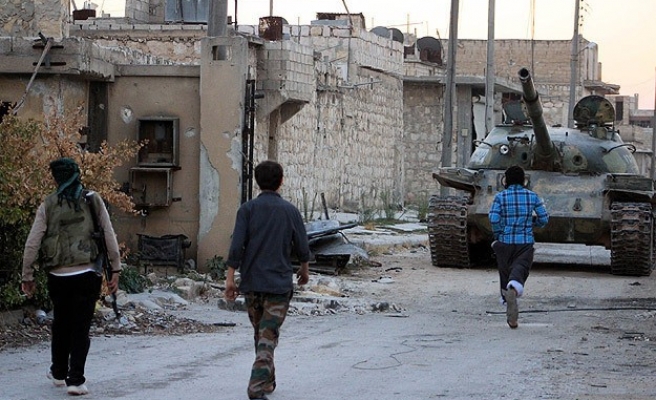 A six-week offensive by the Islamic State in Iraq and the Levant (ISIL) against rivals in eastern Syria has killed 600 fighters and driven 130,000 people from their homes, a monitoring group said on Tuesday.

ISIL, which is battling to control a huge area of east Syria and western Iraq, has advanced along the Euphrates River in the oil producing Deir al-Zor province, driving back militants from Nusra Front and other brigades.

The Syrian Observatory for Human Rights said ISIL now controls most of the northeast bank of the Euphrates from close to the border with Turkey down to the town of Busayra nearly 200 miles (320 km) to the southeast.

It aims to extend that control all the way to the town of Albukamal on the Iraqi border, strengthening links between its Syrian and Iraqi wings, the Observatory's Rami Abdelrahman said.

Across the border, ISIL has made stunning gains, overrunning the headquarters of the provincial government in Iraq's northern city of Mosul late on Monday.

The group follows al Qaeda's ideology but its leader Abu Bakr al-Baghdadi has defied orders by al Qaeda leader Ayman al-Zawahri to stop fighting in Syria and focus on Iraq.

His enemies say ISIL has almost exclusively targeted rival rebels - including the Nusra Front which Baghdadi originally nurtured - rather than Assad's forces, as it exploits turmoil in Syria and insecurity in Iraq to carve out territory.

The UK-based Observatory said 241 fighters from ISIL and 354 from Nusra and other brigades had been killed in fighting since ISIL launched its offensive in Syria's Deir al-Zor province, seizing four oilfields from its rivals.

Another 39 civilians have been killed, including five children, said the Observatory, which relies on a network of medical and military sources and activists across the country to monitor the violence in Syria.

The internecine fighting among Assad's opponents has prevented any coordinated rebel military campaign against him and helped his forces consolidate control in the centre of the country.

Backed by the militant Lebanese Hezbollah movement and Shi'ite Iraqi fighters, his troops have pushed back rebels from the edge of Damascus and border areas with Lebanon - a vital supply line for rebels - as well as the city of Homs.

Syria's northern and eastern provinces remain largely beyond Assad's control, although his forces still hold part of Deir al-Zor's provincial capital and have been making advances around the disputed northern city of Aleppo.

Last week he won re-election in a vote held in government-controlled parts of the country. Opponents dismissed it as a charade in the midst of a conflict which started with protests against the president. Authorities said it gave him a democratic mandate to rule for another seven years.

More than 160,000 people have been killed in Syria's civil war. Nearly three million refugees have sought sanctuary abroad and six million people have been displaced inside the country, the United Nations says.