The Homs governor said that he is mulling plans to extend the evacuation as the three-day truce agreed last week ended on Sunday. 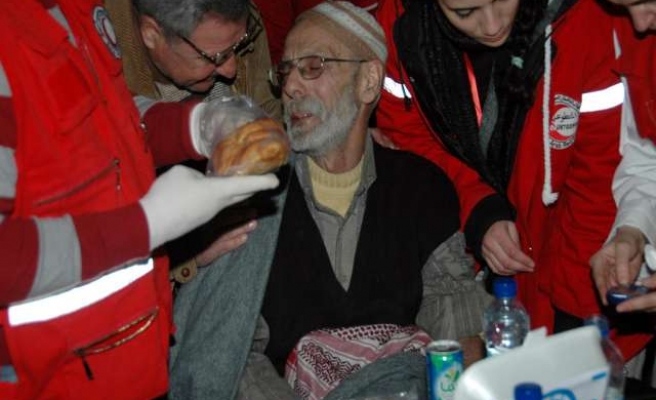 Hundreds of Syrians were evacuated from the old city of Homs on Sunday, Syrian news agency SANA said, as UN and Syrian relief workers resume operations despite the weekend's attacks.

The majority of the 611 people who were allowed out of the besieged city were women, children and the elderly, SANA quotes Homs governor Talal al-Barazi as saying.

Meanwhile, an opposition coalition has accused forces loyal to Syria's embattled President Bashar Assad of killing seven people and injuring 15 in Homs and attempting to prevent humanitarian aid from entering the city.

Barazi's announcement comes as part of a three-day truce agreed last week in the first round of direct talks between Syrian opposition and regime delegations in Geneva. They are scheduled to meet again on Monday.

The mayor also told SANA that "a plan to extend the evacuation process for three days" was being considered.

Eighty three people were evacuated on the first day of the truce on Friday. Since then, relief operations have been disrupted by two subsequent attacks at the weekend on UN and Syrian Arab Red Crescent workers.

UN humanitarian affairs chief Valerie Amos said on Sunday that the attacks were disappointing after the truce deal but insisted that the UN and its partners would not be deterred from doing its "best to bring critical aid to people".

On Amos' Twitter account, she called on the international community to "raise its voice" over the attacks, adding that she welcomed the news that "more (people) were able to leave on (Sunday)".

Istanbul-based Syrian Revolution General Commission (SRGC) said in a statement on Sunday that Assad troops were responsible for the deadly attack on the civilians in Homs. SRGC blamed the regime for attacking those trying to escape from the besieged territories.

The SRGC said that they listed the names of those who want to leave the besieged territories to UN officers; the names on the list will be moved from Homs to the region of Vear, under the supervision of Syrian Red Crescent and the UN.

Homs has been under siege for over a year, with recent reports citing incidents of starvation, as people are forced to eat street animals and grass to survive.

Al-Nusra agrees to hand over Yarmouk to Palestinian control

The Al-Nusra Front Sunday has agreed to hand over its position of the Yarmouk refugee camp, long under blockade by the Syrian regime, to Palestinian armed groups.

Local activist Rami el Sayed from the Yarmouk camp, in the southern Damascus capital of Syria, told the Anadolu Agency that a commission would enter into the camp to dispose of the mines before the Palestinian refugees return.

The UN has been trying to deliver humanitarian aid on a daily basis to the 18,000 Palestinians in Yarmouk. However, 100 people in the Yarmouk refugee camp have died of hunger due to lack of aid access.