Ikhwan stays on streets despite massacre

Authorities have said they want to clear the activists off the streets, but they were still camped there. Some used pictures of Morsi to shield their heads from the sun. Women and children were resting at tents set near the main gathering area. 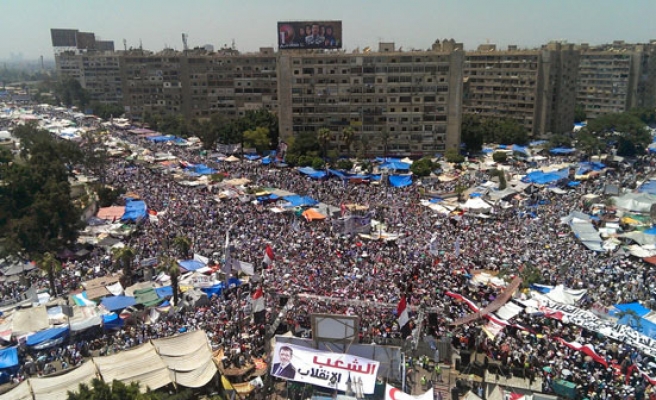 Thousands of supporters of Egypt's Muslim Brotherhood stood their ground in Cairo on Sunday, saying they would not leave the streets despite "massacres" by security forces who shot dozens of them dead.

Egypt's ambulance service said 72 people were killed in Saturday's violence at a Cairo vigil by supporters of deposed President Mohamed Mursi, triggering global anxiety that the Arab world's most populous country risked plunging into the abyss.

Morsi's Brotherhood, which won repeated elections after the fall of autocrat Hosni Mubarak in 2011, has vowed not to leave the streets unless Mursi is restored to power. His supporters accuse the military of reversing the uprising that brought democracy.

"They will not be content until they bring back everything from the era of the corrupt, murderous security and intelligence state," senior Brotherhood official Essam el-Erian said on Facebook. "They've stepped up their efforts to do so by committing massacres never before seen in Egyptian history."

Although Cairo was quiet on Sunday morning, violent clashes rattled the Suez Canal city of Port Said, with a 17-year-old youth killed in fighting between the pro- and anti-Morsi camps and a further 29 people injured, security sources said.

The violence has deeply polarised Egypt, with its secular and liberal elite so far showing little sympathy for the Brotherhood or reservations about the return to power of a military which ruled for 60 years before the 2011 uprising.

However, in one of the first signs of doubt from within the interim cabinet installed after the military takeover, Deputy Prime Minister for Economic Affairs Ziad Bahaa El-Din said the government must not copy the "oppressive and exclusionary policies" of its foes.

"Our position must remain fixed on the need to provide legal guarantees not only for the members of the Brotherhood, but for every Egyptian citizen. Excessive force is not permitted," El-Din wrote on Facebook.

And in another sign of unease, the Tamarud youth protest movement, which mobilised millions of people against Mursi and has fully backed the army, expressed alarm at an announcement that the interior minister was reviving the feared secret political police shut down after Mubarak was toppled.

The killings took place the morning after mass demonstrations called by military chief Abdel Fattah al-Sisi to show public support for a crackdown on "terrorism", which the Brotherhood sees as justifying an onslaught against it.

In an apparent show of support for the police, a smiling Sisi turned up at a graduation ceremony on Sunday broadcast live on state television, receiving a standing ovation from the recruits, all decked out in starched white uniforms.

The military insists it does not want to retain power and aims to hand over to full civilian rule with a "road map" to elections in about six months.

But the very public role of Sisi as face of the new order has led to speculation that the next president could again be a military officer, like all of Egypt's rulers between 1952 and Mursi's election last year.

On Sunday morning army vehicles still surrounded entrances and exits to the square in northeast Cairo where thousands of Mursi supporters have camped out for a month.

Authorities have said they want to clear the activists off the streets, but they were still camped there. Some used pictures of Mursi to shield their heads from the sun. Women and children were resting at tents set near the main gathering area.

"We are right, legitimacy is on our side and hopefully at the end God will lead us to triumph and we will not give up," said Mostafa Ali, 29 from Nile delta town of Mansoura.

New York-based Human Rights Watch said the killings suggested a "shocking willingness" by police and politicians to ratchet up violence against backers of Mursi.

"Supporters of the Muslim Brotherhood have the right to protest peacefully like anyone else," she said in a statement. "Egypt stands at a crossroads. The future of this great country that gave so much to civilization depends on how its citizens and authorities act over the following days and months."

The United States, which provides more than $1 billion a year in military aid to Egypt, urged its Middle East ally to pull "back from the brink", telling the security forces to respect the right to peaceful protest.

The apparent revival of the political secret police is a move that could shake the enthusiasm of some secularists who have otherwise seen little to object to in a government campaign against their Brotherhood enemies.

Citing "extremist and religious activity and things like that", Interior Minister Ibrahim said on Saturday "safety cannot be restored without political security".

Tamarud campaigners issued a statement rejecting the return of any departments tasked with monitoring religious or political activity, arguing that the main aim of Egypt's 2011 revolution was "freedom and social justice".

Close to 300 people have died in violence since Sisi deposed Morsi. Besides the Cairo bloodshed, some of the worse violence has been in the lawless Sinai peninsula, which borders Israel and the Palestinian Gaza Strip, where Islamist militants have vowed to battle government forces after the removal of Mursi.

State news agency MENA said on Sunday that 10 "terrorist elements" in north Sinai had been killed and 20 others arrested in security sweeps over the past 48 hours.

Human Rights Watch's deputy Middle East and North Africa director said in a statement that he thought Saturday's deaths might have been deliberate.

"It is almost impossible to imagine that so many killings would take place without an intention to kill, or at least a criminal disregard for people's lives," Nadim Houry said.

Mursi has been held in army detention at an undisclosed location since he was deposed. Ibrahim said he would likely be transferred shortly to the same Cairo prison where Mubarak is now held, after authorities launched an investigation of him on charges including murder stemming from his 2011 escape from jail duringEgypt's the anti-Mubarak uprising.