Damascus has not seen the destruction and deprivation suffered by other parts of Syria, but the economic strain is biting deep in government-controlled areas where most Syrians live 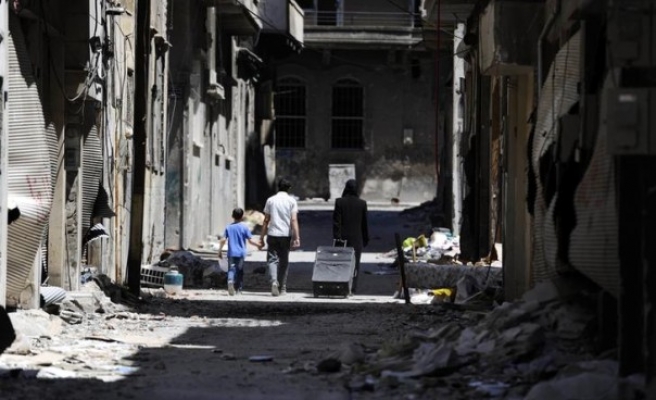 This winter is more peaceful than last for the people of Jaramana, a Syrian town on the Damascus outskirts that has been spared rebel bombardment since the army drove insurgents from a nearby settlement last year.

But while the state has brought more security to Jaramana, a bastion of government support, its residents are experiencing new hardship. Winter is biting hard, and heating oil is hard to find. Wood and even furniture are being used to heat homes.

"Now, things are better than last year," said Adnan Tannous, 50, whose district used be hit by 10 to 15 mortar bombs a day.

But while he is no longer scared to go out at night, his house is cold. "Last year we were able to sort ourselves out with some diesel. But this year, no way," said Tannous, as his wife tried to burn wood stuffed into a heater designed to run on diesel, filling the room with smoke.

Outside, his son used an axe to break up a flimsy cupboard. "It gives nowhere near the heat of diesel," Tannous said.

With Syria's war entering its fifth year, people in Damascus appear unfazed by rockets and mortars that still crash into the city from rebel areas on its eastern outskirts.

Damascus -- President Bashar al-Assad's seat of power -- has not seen the destruction and deprivation suffered by other parts of Syria, where rebel areas have been besieged and entire districts laid waste.

But the economic strain is biting deep in government-controlled areas where most Syrians live.

The conflict has devastated the economy. The lira has tumbled, from 47 to the dollar before the crisis to 220 now, and inflation has spiralled. Taxis metres are calibrated for 2010 and drivers ask for seven times the displayed amount.

Sanctioned by the United States and European states that want Assad to step down, an economy growing at 3.2 percent before the war has collapsed into inflationary recession.

The state has hiked prices of subsidised food and fuel. In January, it raised the price of bread by 40 percent. A bundle of bread weighing more than 1 kg now sells for 35 lira (16 cents).

The price of subsidised diesel stands 257 percent higher than before the war but it can seldom be found at that price. It sells for double on the black market, if it can be found.

As a result, the trade in firewood has boomed. One firewood trader in Jaramana said demand is 50 percent higher than last winter. "Even fruit and vegetable traders are selling firewood," he said, surrounded by sacks of wood for sale.

"Everything has doubled in price," said Tannous, who earns the equivalent of $4 a day distributing cleaning products.

To save money, he rides a bicycle instead of taking the bus. "We haven't grilled meat for two or three months," he said.

Still, his support for Assad appears solid. Thanking the army, he said security was his main concern. He counts himself lucky, telling of an acquaintance who made it out of a rebel area with stories of how people were eating grass to survive.

On the outskirts of Jaramana, ruined apartment blocks in a former rebel district are a reminder of the devastating impact of a war that has killed 200,000 people.

The government, which has endured thanks to economic and military support from allies including Iran, is conscious of economic fatigue. Assad ordered a monthly allowance of 4,000 lira ($18) for each state employee and retiree in January.

The government says it is facing an economic war waged by the United States, European governments and Gulf Arab countries.

Trying to lift spirits, a state-sponsored campaign launched last month urges citizens to "Live 2015 differently", a slogan displayed on billboards across Damascus. State-run grocers are offering discounts as part of the campaign.

"LIFE OF A THOUSAND BLESSINGS"

"The state is telling the nation: 'I am strong, I am here, and I can intervene at any moment,'" said the manager of a state-run supermarket.

But the oil minister has been quizzed in parliament over the fuel shortages. Suleiman al-Abbas, the minister, said the ministry had been forced to ration distribution to the provinces because of a dearth of locally produced oil delivered to the two oil refineries, the state news agency reported on Feb. 18.

Abbas said the priority was to secure fuel to run the military, bakeries, hospitals and the communications network.

Cold weather has also caused a spike in demand.

With Syrian oil fields falling to the ISIL militant group in the east, Iran has provided its allies in Damascus with a fuel lifeline supplied on credit.

Sherif Shahedeh, a member of parliament, said he was surprised at how well the economy doing in the circumstances.

According to a U.N. report last year, Syria's real GDP stood at $33 billion in 2013, almost half its level before the conflict began in 2011.