Sunday was the first session in the trial where Morsi and 10 other co-defendants face on charges of spying for Qatar, the Gulf ally to the Morsi administration 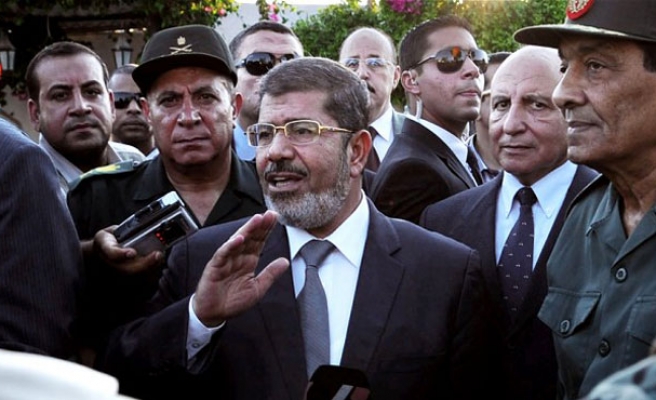 World Bulletin / News Desk
Ousted Egyptian President Mohamed Morsi on Sunday described his trial on charges of espionage as a "farce," which prompted the court judge to threaten filing a separate lawsuit against him for insulting the court.

This came during the first session in a fresh trial where Morsi and 10 other co-defendants face charges of spying for Qatar, the Gulf ally to the Morsi administration during the latter's single year in office.

"The trial's proceedings are a farce which the judiciary should not part of," Morsi told the Cairo court from inside a sound-proofed glass cage.

"What happened on July 3 was a military coup and its leader is the one who should be behind bars," he said in reference to President Abdel-Fattah al-Sisi, who led Morsi's ouster in the summer of 2013 before winning a presidential poll in May of last year.

Presiding Judge Mohamed Fahmi, for his part, cut off Morsi's microphone and told him that he considered the word "farce" as an insult to the court.

"The court will overlook the insult this time but will not hesitate to file a lawsuit if it were repeated again," the judge said.

The documents which the court accuses Morsi of leaking to Qatar allegedly include classified information on Egypt's army, military dispositions and armaments, as well as additional information on the country's domestic and foreign policies.

Morsi, Egypt's first democratically elected leader, was ousted by the military in July 2013 – after only one year in office – following protests against his presidency.

Morsi, like his co-defendants, insists the charges against him are politically motivated.