The Western diplomat said some of the discrepancies went beyond routine errors, noting that there were omissions from Syria's declaration. 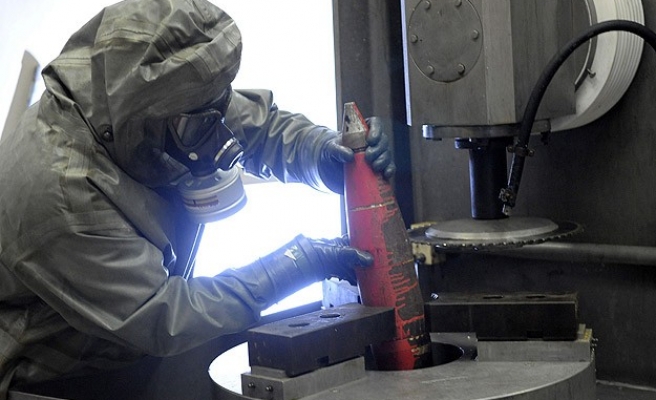 Inspectors overseeing the destruction of Syria's chemical weapons arsenal have asked President Bashar al-Assad's government to clarify disparities in its original declaration on its cache of toxic gas, diplomats said on Wednesday.

The envoys were citing remarks by Sigrid Kaag, head of the joint mission to Syria of the United Nations and the Organization for the Prohibition of Chemical Weapons, who was briefing the 15-member U.N. Security Council.

"The (U.N.-OPCW) team has been in Damascus seeking clarification on discrepancies in the original declaration," a diplomat present at the closed-door meeting told Reuters on condition of anonymity.

Speaking to reporters after the council meeting, Kaag spoke of ongoing efforts to overcome the declaration's "deficiencies that have been identified, in collaboration with the authorities." She did not elaborate.

The Western diplomat who attended the meeting said some of the discrepancies went beyond routine errors, noting that there were omissions from Syria's declaration.

Last month, U.N. Secretary-General Ban Ki-moon said that a June 30 deadline for the destruction of all of Syria's declared chemical weapons would not be met and the mission would continue working for a "finite period of time." He also voiced concern about recent chlorine gas attacks in Syria.

French U.N. Ambassador Gerard Araud said on his Twitter feed that Kaag's mission "will need to continue its activities beyond this date (June 30)." He also noted that the recent alleged chlorine gas attacks, which France has blamed on the government, were a violation of international law.

Assad, embroiled in the fourth year of a civil war with rebels fighting to oust him, agreed last year to hand over the country's entire chemical weapons stockpile and ensure its total destruction by June 30.

But Kaag made clear that the destruction of the weapons would not be completed this month, noting there was still work to be done on destroying facilities linked to Syria's chemical weapons program.

After hundreds of people were killed in an August 2013 sarin nerve gas attack near Damascus, a September agreement with Russia and the United States averted U.S. military strikes in response to the worst chemical weapons attack in decades, which Washington and its European allies blamed on Assad.

His government, which denies the allegation and blames the rebels for all chemical attacks in Syria, still has roughly 7 percent of 1,300 metric tonnes of chemical weapons it declared to the OPCW, enough highly toxic material to carry out a large-scale attack.

Assad's government has indicated it wants the U.N.-OPCW mission shut down as soon as all chemicals are shipped out of Syria.

But Western officials want the mission to continue to investigate numerous ambiguities in Syria's chemical weapons declaration, which have become increasingly glaring during the course of the mission's work.

The officials have cited U.S., French and British intelligence that Assad's government had failed to disclose all of its poison gas stocks in its original declaration, leaving it with the capability to produce and deploy chemical arms.