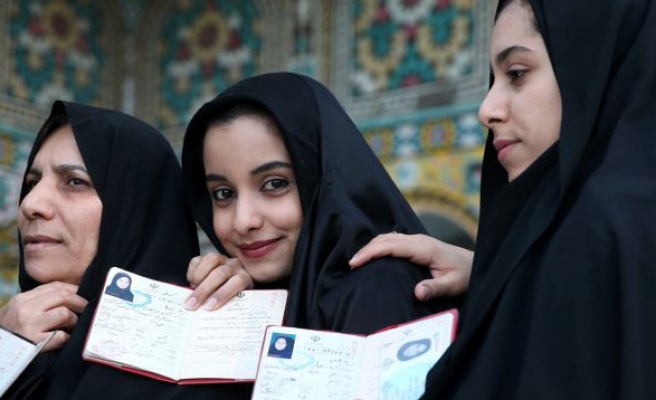 Iran was expected to announce preliminary results Saturday from elections for parliament and a second poll to pick a powerful group of clerics who appoint the country's supreme leader.

Coming just a month after sanctions were lifted under Iran's nuclear deal with world powers, the outcome of Friday's voting is being seen as a de-facto referendum on President Hassan Rouhani's government.

A political moderate, Rouhani is hoping an alliance with reformists can eliminate or at least curtail conservative dominance of parliament, giving him a chance of passing social and political reforms.

As well as 290 MPs, voters were also selecting the Assembly of Experts, an 88-member committee of clerics responsible for monitoring the work of supreme leader Ayatollah Ali Khamenei.

Lawmakers are elected for four years, but the assembly has an eight-year term. Should Khamenei, who is 76, die during that time its members would choose his replacement.

Voting was busy on Friday and polling hours were extended, although officials have yet to announce final figures for turnout.

The first results are expected to come from the provinces, but the vote tally in the capital, which has a population of 12 million and was electing 30 lawmakers, will take around three days.

Khamenei, who is the Islamic republic's ultimate authority, was among the first to vote and he urged the country's 55-million-strong electorate to follow suit, as "it's both a duty and a right".

Participation in parliamentary elections four years ago was 64 percent nationwide and 48 percent in Tehran.

A higher turnout would help Rouhani and his reformist allies, after many moderate voters stayed away in 2012 in protest at the re-election three years earlier of hardline president Mahmoud Ahmadinejad.

Known as the "diplomat sheikh" because of his clerical credentials and willingness to negotiate, Rouhani was the driving force behind the nuclear deal, which he delivered despite political pressure at home.

The agreement with powers led by the United States, the Islamic republic's bete noire, raised hopes of recovery in Iran. But although the economy exited a deep recession in 2014-2015, growth has stagnated in the past year.

A pro-government coalition of moderate and reformist candidates called "The List of Hope" is representing the president's ambitions in the polls.

If voters support the pro-Rouhani ticket, the president could swing the balance of power among MPs and potentially pass economic, social and political legislation that has so far been blocked.

The run-up to polling day was largely overshadowed by controversies over who was allowed to stand. Thousands of candidates were excluded.

Reformists said they were worst hit, with the barring of their most prominent faces leaving them with untested hopefuls.

A total of 4,844 candidates, about 10 percent of whom are women, stood in the parliamentary election. Only 159 clerics -- a fifth of the applicants -- were vying for the Assembly of Experts.