The Islamic revolution of Iran took place 35 years ago today on February 11, 1979. 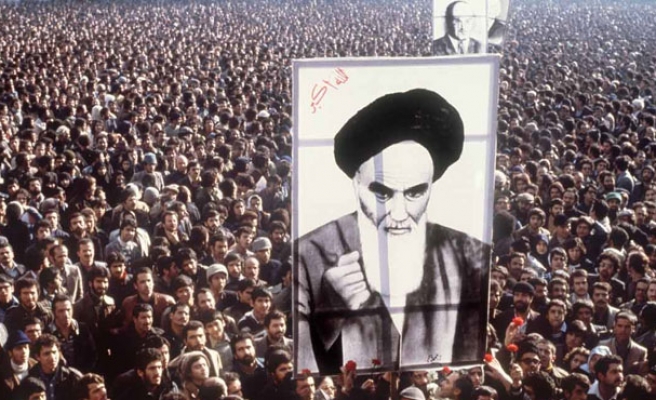 The 35th anniversary of the 1979 Iran Islamic revolution was celebrated across the country by millions of Iranians.

Despite progress in nuclear peace talks between Iran and the West, the old slogans of 'Death to America, Death to Israel' continued to be chanted on the streets. The demonstrators reaffirmed their allegiance to the ideals of the Islamic revolution and Ayatollah Khomeini.

In a speech marking the 35th anniversary of the 1979 Islamic revolution, Rouhani attacked economic sanctions imposed by the West as "brutal, illegal and wrong" and said countries in the region had nothing to fear from Iran.

"I say explicitly to those delusional people who say the military option is on the table, that they should change their glasses ... Our nation regards the language of threat as rude and offensive," he said.

"I want to expressly announce that the movement of the Iranian nation towards the peaks of scientific and technical progress and advancement, including peaceful nuclear technology, will be forever," he added.

"We wanted to strip ill-wishers of their scare-tactics, we wanted to speak even louder that there is no basis for fearing Iran in the region, that they are all lies ... We must eradicate the negative image in world public opinion about our revolution."

In February, 1979, Shah Reza Pahlavi was overthrown. The Iranian Revolution turned the country's monarchy into an Islamic State.

Demonstrations against the Shah had started in 1977, developing into a campaign of civil resistance. Between August and December 1978, strikes and demonstrations paralyzed the country. The Shah left Iran for exile on January 16, 1979 as the last Persian monarch.

Ayatollah Khomeini was invited back to Iran by the government, and returned to Tehran to a greeting of several million Iranians.

Mohammad Reza Pahlavi came to power during World War II after an Anglo-Soviet invasion forced the abdication of his father Reza Shah.

Mohammad Reza gradually lost support from the Shi'a clergy of Iran as well as the working class, particularly due to his strong policy of modernization, secularization, conflict with the traditional class of merchants known as bazaari, recognition of Israel, and corruption issues surrounding himself, his family, and the ruling elite.

In many cities across the country violent clashes between revolutionaries and the shah’s supporters broke out.

Revolutionaries occupied parliament, the Senate, the television broadcaster and other state-run institutions. Shortly thereafter, the fall of the monarchy was announced.

To this day, Iranians celebrate February 11 as the anniversary of the 'Islamic revolution.’ An Islamic constitution consssited and Khomeini was declared as religious leader of the country.

In his speech, he warned the Iranian people saying that their enemies would seek any way to plot againt the revolution.

The revolution ended U.S. influence on the country. Coup attempts and the Iran-Iraq war could not to finish the power of the Islamic revolution.