Iran celebrates the 36th anniversary of the Islamic revolution with popular rallies, as it is trying to reach a fine deal with the world powers on its nuclear program. 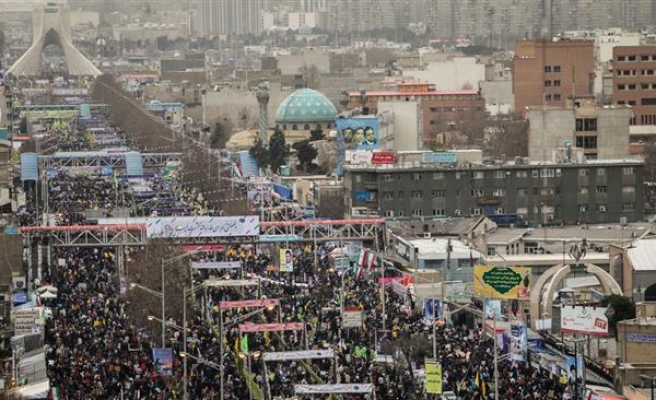 Iran marked the anniversary of its 1979 Islamic Revolution on Wednesday with massive rallies, with many chanting against the U.S. and Israel as the country tries to reach a permanent deal with world powers over its nuclear program.

In capital Tehran, people were also waving banners with anti-U.S. and anti-Israel slogans, while chanting support of the country's rights to peaceful use of nuclear power.

On Tuesday, one day before the anniversary, Iranian President Hassan Rouhani urged the world powers to seize the opportunity, saying Tehran has already taken major steps in the nuclear talks to reach a final deal.
"Alhough we haven't reached a final agreement yet, Iran is following nuclear negotiations seriously and good progress has been achieved so far," Rouhani was quoted as saying by official IRNA news agency.

The Western powers have accused the Islamic Republic of having been developing atomic weapons under the cover of civilian nuclear plan. Iran rejected the allegations as baseless, and insisted that its nuclear program is solely peaceful.

Rouhani said:"We seek a win-win agreement, according to which Iran would [guarantee] the transparency of its peaceful nuclear activities within the framework of international law and [in return] the opposite side should put an end to inhumane and illegal sanctions [against Iran]. This will benefit both sides.”

He further dismissed claims by Western countries that sanctions have forced Iran to sit at the negotiating table.

Also, Rouhani urged the Iranians to actively participate in the rallies on Wednesday, marking the 36th anniversary of the victory of the Islamic Revolution, to show their all-out support for the Islamic establishment, according to semi-official Fars news agency.

Iran's revolution began with a popular democracy movement and ended with the establishment of the world's first Islamic state.

The revolution turned Iranian society upside down and became one of the defining moments of the 20th Century.

The opposition was lead by Ayatollah Khomeini, who lived in exile in Iraq and later in France. His message was distributed through music cassettes, which were smuggled into Iran in small numbers, and then duplicated, and spread all around the country. This was the beginning of Iranian revolution.

On January 16 1979, the Shah left Iran. Shapour Bakhtiar as his new prime minister with the help of Supreme Army Councils couldn't control the situation in the country anymore.

Ayatollah Khomeini returned to Iran on February 1. Ten days later Bakhtiar went into hiding, eventually to find exile in Paris. Processes against the supporters of the Shah started, and hundreds were executed.

On April 1, after a landslide victory in a national referendum in which only one choice was offered (Islamic Republic: Yes or No), Ayatollah Khomeini declared an Islamic republic with a new Constitution reflecting his ideals of Islamic government.

Ayatollah Khomeini became supreme spiritual leader (Valy-e-Faqih) of Iran. Subsequently many demonstrations were held in protest to the new rules, like extreme regulations on women's code of dress.

On November 4: Iranian Islamic Students stormed the US embassy, taking 66 people, the majority Americans, as hostages. 14 were released before the end of November. In November: The republic's first Prime Minister Mehdi Bazargan resigned.

Ayatollah Khamenei In 1980 Abolhassan Beni Sadr was elected for president.

On September 22: Iraq massively invaded Iran, in the belief that Iran is too weak military to fight back. Iraq was claiming territories inhabited by Arabs (Southwestern oil-producing province of Iran called Khouzestan), as well as Iraq's right over Shatt el-Arab (Arvandroud). Some battles were won in the favor of Iraq, but a supposedly weakened Iranian army achieved surprising defensive success.

In 1981, on January 20, the hostages in the US embassy were released, after long negotiations, where USA concedes to transfer money, as well as export military equipment to Iran.