Iran nuclear deal: from US walkout to fresh sanctions 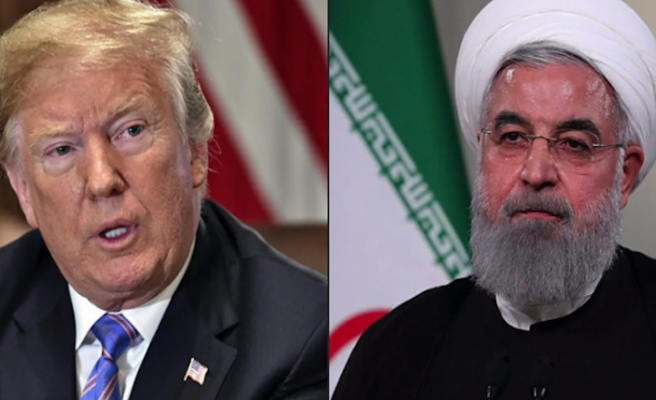 It reimposed a first wave of sanctions on the Islamic republic in August and is due to pass the remaining tranche on November 5 targeting its crucial oil industry and central bank.

Here are the key developments since that dramatic walkout:

- US quits -
President Donald Trump on May 8 pulls the United States out of the hard-won nuclear pact between world powers and Iran.

"The Iran deal is defective at its core," he says.

The move provides for the reinstatement of US sanctions on Iran and companies with ties to the Islamic republic.

Washington warns other countries to also end trade and investment in Iran and stop buying its oil, or face punitive measures.

It says sanctions will take effect immediately for new contracts and gives foreign companies an additional 90 to 180 days to end existing trade with Iran.

But other parties to the deal -- Britain, France, Germany, Russia and China -- insist Iran has abided by its commitments and say they are determined to save the agreement.

- Enrichment threats -
Iranian President Hassan Rouhani warns Tehran could halt the curbs it agreed in the deal and restart increased uranium enrichment "without limit", looking to the remaining parties to save the accord.

Washington warns on May 21 that Iran will be hit with the "strongest sanctions in history" unless it capitulates to a series of demands aimed at curbing its missile programme and interventions around the Middle East.

- Five powers back deal -
A top US official says on July 2 that Washington is determined to force Iran to change behaviour by cutting its oil exports to zero, confident the world has enough spare oil capacity to cope.

On July 6, Tehran's five remaining partners in the nuclear accord vow to back "the continuation of Iran's exports of oil and gas".

On July 16, EU countries reject the US demand that they economically isolate Tehran and they move to give European firms legal cover to operate in Iran.

But the next day European sources say the US has dismissed requests to spare its firms from sanctions penalties.

- War of words -
On July 22, Rouhani warns the United States that any conflict with Iran would be the "mother of all wars".

Trump responds with an all-caps Twitter tirade telling him to stop making threats "OR YOU WILL SUFFER CONSEQUENCES".

On July 30, however, Trump says he is ready to meet Iranian leaders "anytime they want" and promises "no preconditions".

- Sanctions, again -
On August 7, Washington reimposes a first set of sanctions on Iran, described by Trump as the "most biting ever".

They involve freezing financial transactions and imports of raw materials, and penalties on purchases in the car and commercial aviation sectors.

Within hours German carmaker Daimler says it is halting its activities in Iran. On August 20, Iran's oil minister announces French energy giant Total is quitting its multi-billion dollar gas project in the country.

- European evasion -
The European Union on September 25 announces plans to preserve business with Tehran and evade the new US sanctions.

A "legal entity" will allow businesses to transfer money without coming under Washington's scanner, foreign policy chief Federica Mogherini says, although analysts remain highly sceptical that private firms will be willing to risk US penalties by using it.

- Court confrontation -
The International Court of Justice (ICJ), the UN's top court, orders the United States on October 3 to lift sanctions on humanitarian goods for Iran, saying they breached a 1955 friendship treaty between the two countries.

The following day, Secretary of State Mike Pompeo says Washington is terminating the treaty. There have been no diplomatic relations between the rivals since 1980.