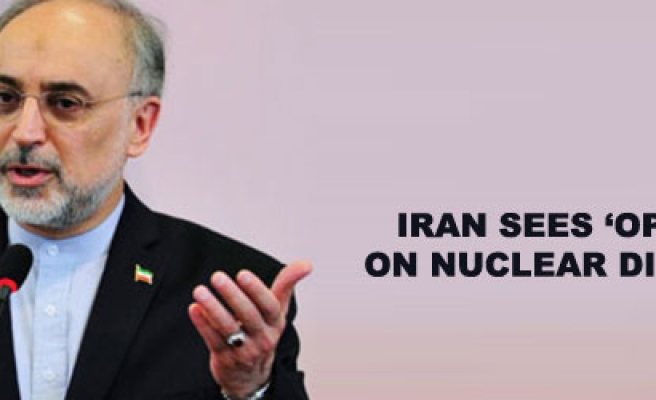 An Iranian official said on Wednesday that he saw an "opening" in Iran's nuclear dispute with the West, a news agency reported, in the latest signal that Tehran expects fresh movement to break a decade-old deadlock.

The United States and its allies believe Iran is seeking a nuclear weapons capability, and have imposed sanctions aimed at stopping it. Iran denies it wants a bomb and says its nuclear energy program has peaceful aims.

Iran and world powers have been engaged in negotiations which have so far failed to resolve the dispute. The head of Iran's Atomic Energy Organization, Ali Akbar Salehi, said he expected there could be a breakthrough in the talks by the end of the current Iranian calendar year, 1392, which ends in March 2014.

The election in June of centrist cleric Hassan Rouhani as president has raised expectations of a settlement to the nuclear dispute. Rouhani has called for "constructive interaction" with the world and more moderate policies at home and abroad.

Salehi, who served as foreign minister under Rouhani's predecessor Mahmoud Ahmadinejad, said the groundwork for a breakthrough in talks was laid during Ahmadinejad's administration.

"With the information that we had seven or eight months ago, and the indications we saw, we were certain that 1392 would be a very good year especially on Iran's nuclear issue, and today as well we see indications to that effect," Salehi said, according to Mehr.

His comments came a day after Iranian Supreme Leader Ayatollah Ali Khamenei, who has the ultimate say on nuclear policy, said he was open to "flexibility" when it came to diplomacy.

Salehi also said he doubted news reports that Rouhani had offered to shut Fordow, an underground uranium enrichment facility near the religious city of Qom.

"I think it is unlikely that such a thing has been said," Salehi said, according to Mehr.