State TV footage showed a number of gunboats swarming a huge model warship and blasting it with missiles. 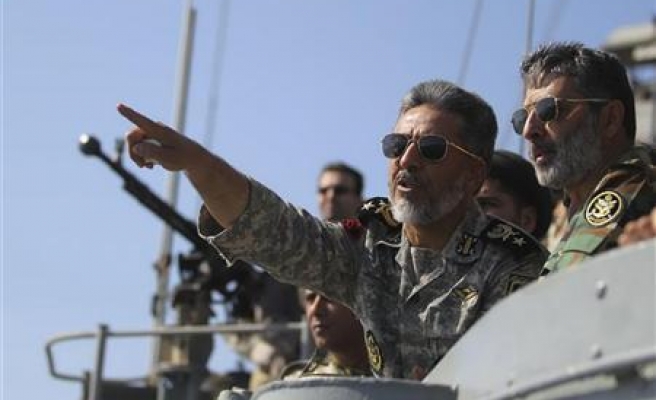 Iran's elite Revolutionary Guards staged war games in the Strait of Hormuz on Wednesday, including a gunboat attack on a model U.S. warship, in Tehran's latest display of military muscle in a Gulf shipping channel vital to world oil exports.

The Shi'ite Muslim Islamic Republic sees the Gulf, between Iran and the Sunni Arab states, as its own backyard and believes it has a legitimate interest in expanding its influence there.

A ceremony marking the exercises was attended by commanders of the Guards, an influential military force led by anti-Western hawks, as well as by parliament speaker Ali Larijani.

"With attention to the situation in the region, we have noticeably expanded the defence budget of the armed forces to ensure the stable security of the region," Larijani told a news conference before the exercises, according to Fars News.

State TV footage showed a number of gunboats swarming a huge model warship and blasting it with missiles.

The "maquette of an American aircraft carrier" was built to scale and targeted with cruise missiles and ballistic missiles, according to Fars News, which is linked to the Revolutionary Guard.

The gunboats also carried out an exercise in laying mines, according to the Iranian Students' News Agency.

At one point a camera from state TV panned across a banner which read "If the Americans are ready to be buried at the bottom of the waters of the Persian Gulf - so be it", a quote from Iran's first Supreme Leader, Ayatollah Ruhollah Khomeini.

Some 30 percent of all seaborne traded oil flows through Hormuz, according to the U.S. Energy Information Administration, and U.S. officials have expressed concern in the past that Iran could try to disrupt the oil flow or even attack American warships patrolling the waters of the Gulf.

Iran, whose entire southern border runs along the Gulf and the adjacent Gulf of Oman, has often said it could block Hormuz, which connects the two waters, if Tehran came under military attack over its disputed nuclear programme.

Talks on the programme between Iran and the United States, Russia, China, Britain, France and Germany are intended to ensure the country's nuclear programme is not aimed at developing nuclear weapons. Iran says its nuclear work is entirely for peaceful purposes.