Iranian President Hassan Rouhani and Pakistani Prime Minister Nawaz Sharif have vowed to boost cooperation on regional security and trade during talks in Islamabad, the first visit by an Iranian head of state in 14 years. 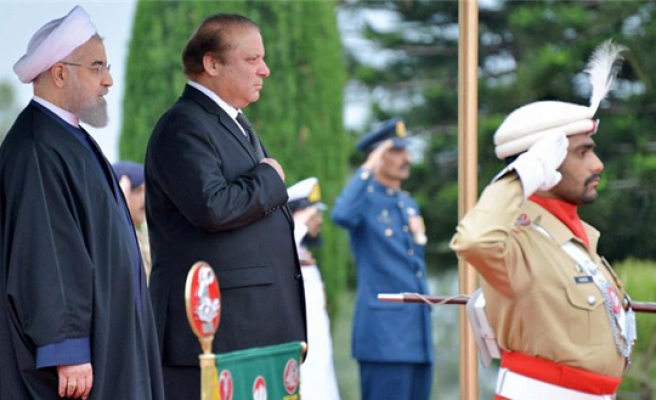 Iranian President Hassan Rouhani, who arrived on a two-day state visit to Pakistan, met with Pakistani Prime Minister Nawaz Sharif and held talks on matters of mutual interest, Islamabad said in a statement.

"Our trade and economic ties have suffered due to sanctions. We have agreed to strengthen our bilateral ties in diverse areas of trade, economy and energy," the statement quoted Sharif as saying.

After the talks, Sharif and Rouhani witnessed the signing of six agreements related to trade and economy including a "Five Year Strategic Trade Cooperation Plan".

Rouhani, according to the Pakistani statement, said the two sides discussed ways to explore new opportunities for cooperation in the energy sector, including the export of electricity from Iran to Pakistan.

He said they also discussed ways to boost bilateral trade and to move forward a free trade agreement between Pakistan and Iran.

"Pakistan and Iran consider each other's security as their own security," Rouhani said, adding that there was "a will and resolve of the two countries to combat extremist and terrorist groups and not to allow such elements to shatter peace in the region".

Pakistan is counting on a joint project with Iran to solve a long-running power crisis that has sapped economic growth.

But the project immediately hit quicksand in the form of international sanctions on Tehran.

Tehran has built its own section of the 1,800-kilometre (1,100-mile) pipeline, which should eventually link its South Pars gasfields to the Pakistani city of Nawabshah near Karachi.

As part of an ambitious $46 billion economic corridor linking western China to the Middle East through Pakistan, Beijing recently started work on the section of pipeline between Nawabshah and the port of Gwadar close to the Iranian border.