Iran warns West that will see demise of President 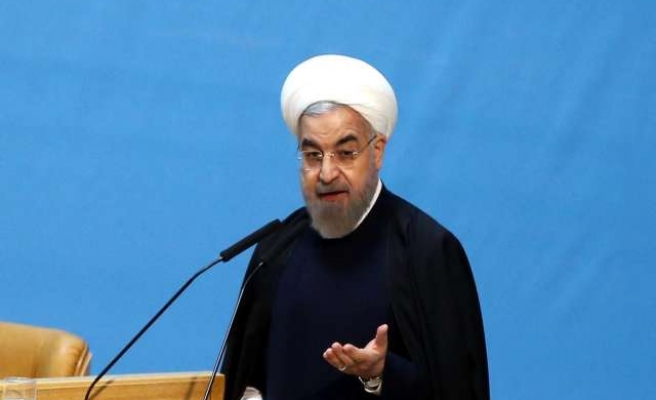 Iran's foreign minister has warned the United States that failure to agree a nuclear deal would likely herald the political demise of pragmatist President Hassan Rouhani, Iranian officials said, raising the stakes as the decade-old stand-off nears its end-game.

Mohammad Javad Zarif pressed the concern with U.S. Secretary of State John Kerry at several meetings in recent weeks, according to three senior Iranian officials, who said Iran had also raised the issue with other Western powers. Zarif's warning has not been previously reported.

Western officials acknowledged that the move may be just a negotiating tactic to persuade them to give more ground, but said they shared the view that Rouhani's political clout would be heavily damaged by the failure of talks.

The warning that a breakdown in talks would empower Iran's conservative hardliners comes as the 12-year-old stand-off reaches a crucial phase, with a March deadline to reach a political agreement ahead of a final deal by June 30.

The agreement aims to end sanctions in exchange for curbs on Tehran's nuclear program, though hard-to-bridge differences remain, particularly on the timing of the relief on economic sanctions and the duration of the deal.

Both U.S. President Barack Obama and Rouhani, who Iranian officials say has staked his career on the deal, are facing stiff domestic opposition to an agreement, narrowing the scope for compromise.

A senior U.S. official denied that any such warnings had been received from the Iranians. "We'll leave assessment of Iranian politics to the Iranians but this rumor is untrue," the official told Reuters on condition of anonymity.

But the Iranian officials insisted that Zarif had raised the concern with Kerry. The two have met repeatedly in recent weeks in an attempt to break the impasse, most recently on Friday when they talked for over an hour on the sidelines of the Munich Security Conference.

"As Rouhani is on the frontline, naturally he will be more harmed," said one of the officials, who has direct knowledge of Zarif's discussions with Kerry.

Other Western officials said the Iranian delegation had raised the same concern in talks recently. If the talks fail, Rouhani would likely be sidelined and his influence dramatically reduced, giving hardliners like Iran's Revolutionary Guard Corps an upper hand, Iranian officials and Western analysts say.

A comprehensive nuclear deal is seen as crucial to reducing the risk of a wider Middle East war, at a time when Iran is deeply involved in conflicts in Syria and Iraq. After nearly a year of talks, negotiators failed for the second time in November to meet a self-imposed deadline for an agreement.

Iran rejects allegations it is developing the capability to produce atomic weapons. But it has refused to halt uranium enrichment and other sensitive atomic work, leading to U.S., European Union and U.N. sanctions that have hobbled its economy.

The key sticking point in the talks at the moment is Iran's demand that Western powers agree to the quick end of oil and banking sanctions, Western and Iranian officials say.

One of the Iranian officials, who also had direct access to the talks, said the Americans were talking in terms of years for the sanctions relief while Iran wanted curbs on oil and banking to be lifted within six months.

Rouhani was elected in 2013 on promises of ending the crippling Western sanctions, improving the economy and reducing the country's diplomatic isolation.

But he faces a worsening power struggle with Iran's Supreme Leader Ayatollah Ali Khamenei, who has said Iran should immunize itself against sanctions, suggesting that he is prepared to live with them. Khamenei has the final word on any deal.

Rouhani has warned that the Islamic Republic needs to end its isolation to help its economy, which has also been hit hard by plunging oil prices.

Just as Iranian negotiators say privately that their room for compromise is narrowing, so too is that of the United States and European delegations, Western officials say.

Both Israel and Saudi Arabia are suspicious of the U.S. decision to engage with Iran on the nuclear issue. Israelhas threatened to use military force against Iranian nuclear sites if diplomacy fails to contain the threat it feelsTehran poses.

The United States, officials familiar with the talks say, has already compromised on the issue of how many centrifuges Iran would be allowed to operate.

Obama could temporarily suspend many of the harshest unilateral U.S. sanctions against Iran but permanent removal would have to be approved by the Republican-controlled Congress, where there is little appetite for sanctions relief.

The Senate is finalizing a bill for tougher sanctions if there is no final nuclear deal by June 30. Obama has vowed to veto any new Iran sanctions bill.

Another Western official said Rouhani appeared to have underestimated the resolve of Washington and Europeto demand limitations on Iranian nuclear activities for a decade or more in exchange for sanctions relief.

"Rouhani thought that by speaking nicely and not calling for Israel's destruction, Western powers would rush to sign a deal, any deal, with Iran," the official said. "He miscalculated. The Western powers may also want an agreement but they're also constrained by Congress, Israel and Saudi.