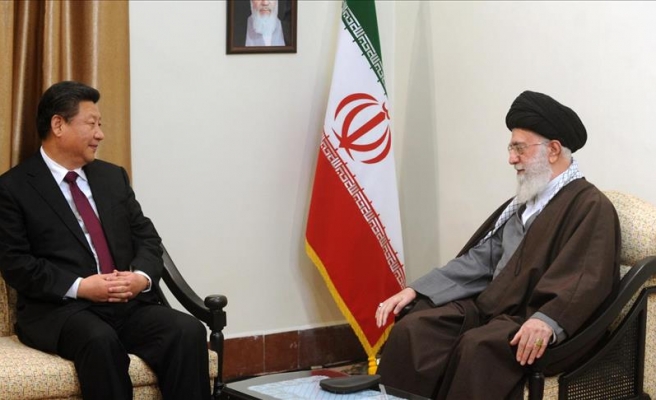 Iranian President Hassan Rouhani has described a visit by his Chinese counterpart to Iran as "historic" and "the beginning of a new era between the two countries".

Rouhani received Chinese President Xi Jinping on Saturday after the latter arrived to Tehran’s Palace of Sadabad on Friday evening as part of an ongoing tour of the Middle East region.

Following closed-door meetings between delegations from both sides, the two countries signed 17 memorandums of understanding in several fields, including nuclear energy, security and environmental protection.

They also reiterated plans to launch the "Road of Maritime Silk – 21st Century," which is aimed at reactivating economic traffic along Asia’s historical Silk Road corridor.

At a joint press conference held after a signing ceremony, Rouhani noted that Iran and China had enjoyed "two millennia of solid bilateral relations".

He went on to hail "the close points of view on international issues and mutual interests" shared between the two Asian powerhouses.

The Iranian president stressed the importance of Xi’s visit, which comes shortly after the lifting of economic sanctions imposed on Iran by the U.S. and EU.

Iran, Rouhani said, was currently mulling its strategic relations for the next 25-year period, including the possibility of increasing Iran-China trade exchanges to some $600 billion over the next decade.

Tehran, he added, was also mulling ways of promoting regional stability and fighting the scourge of terrorism.

Xi, for his part, noted that China was currently Iran’s largest trading partner, stressing that his visit to the Islamic republic was intended to further bolster relations between the two countries.

Xi went on to point out that his country represented the largest importer of crude oil from Iran.

Iran is the world’s fifth largest oil producer, exporting more than 540,000 barrels of oil per day to China alone.

According to official Chinese data, trade volumes between the two countries reached $52 billion in 2014, representing a 70-percent increase on the previous year.