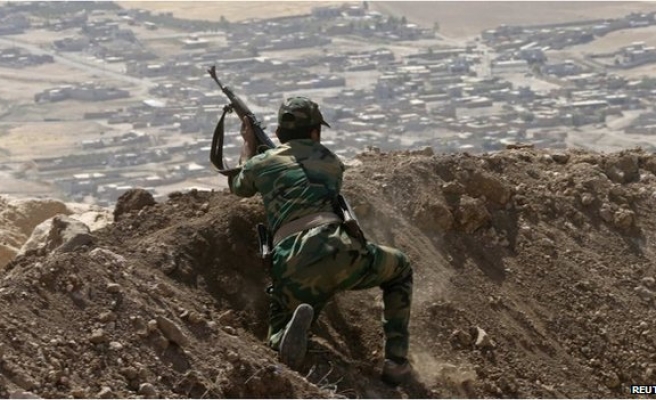 World Bulletin/News Desk
Iraqi armed forces started a military operation against the ISIL in the western province of Anbar on Thursday.

“Colonel Haitham Al-Deleemi, a military commander, was killed during the operation,” Malullah Al-Abeedy, a government official, told The Anadolu Agency.

A U.S.-led coalition is aiding the Iraqi forces with intensive airstrikes. However, improvised explosive devices planted by ISIL are a major obstacle for Iraqi forces.

The conflict between ISIL and Iraqi security forces is ongoing in Anbar province.

Two security guards were killed and four wounded in a suicide attack on Wednesday evening, according to an Iraqi army general.

“A car exploded at a security checkpoint in Ramadi city, in the north of Anbar province. An ISIL suicide bomber drove the car towards the checkpoint,” Anbar operations chief General Al-Rukn Kassim Al-Muhammadi told The Anadolu Agency.

ISIL launched a counter-attack on Thursday, resulting in it controlling two areas in the western Iraqi province of Anbar.

The areas are close to Baghdadi town, located around 13 miles west of Hit city in Anbar governorate.

ISIL besieged around 450 Sunni tribal fighters in the region, a security source said.

“ISIL militants moved with a group of armored vehicles and tanks from Hit city while taking Al-Jazeera road and managed to trap 450 fighters after controlling the Mahbubiya and Gurna areas,” the source, speaking on condition of anonymity, told The Anadolu Agency.

ISIL controls many areas of the governate and is attempting to completely control the provincial capital, Ramadi city.

The U.S. is leading an international coalition which has carried out numerous airstrikes against ISIL in Iraq and Syria since the militant group overran Mosul, in northern Iraq, in June.