Davutoğlu is the first Turkish FM and the first senior Turkish official to set foot in the city in 75 years. 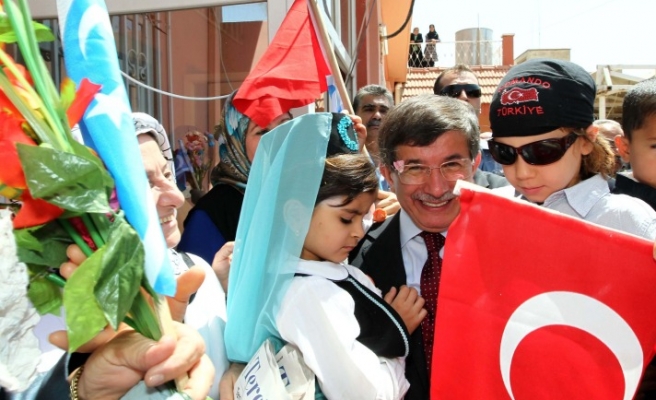 Turkish Foreign Minister Ahmet Davutoğlu paid a historic visit to Kirkuk, an oil-rich city in northern Iraq, on Thursday, as the first senior Turkish official to visit in 75 years, a move sharply criticized by the Iraqi government.

According to a statement released by the Iraqi Foreign Ministry on Thursday, the Iraqi government was not informed of nor did it approve the Turkish foreign minister's trip.

"All of that was done without the knowledge or approval of the Foreign Ministry and without going through the official and diplomatic channels to organize this visit," a statement on the Iraqi Foreign Ministry's website said.

"It is not in the interest of Turkey or any other party to underestimate national sovereignty or violate the rules of international relations and not comply with the most basic regulations in the relations of states and officials," the Foreign Ministry added.

Davutoğlu is the first Turkish FM and the first senior Turkish official to set foot in the city in 75 years.

Speaking to reporters at the headquarters of Iraqi Turkmen Front, Davutoğlu pledged that Turkey would use all of its means to maintain the peace in Kirkuk.

"Kirkuk's unity and fraternity is Iraq's unity and fraternity. In Kirkuk, Turkmen, Kurds and Arabs have lived together for centuries and they will live in peace forever. And we will live together in peace with our Iraqi brothers regardless of their Sunni, Shiite, Arab, Kurdish, Turkmen or Christian identities," Davutoğlu told reporters whom he greeted in Turkish, Kurdish and Arabic after a meeting with Kirkuk Governor Najmadin Kareem.

Prior to his speech, Davutoğlu came together with representatives of Turkmen parties and institutions in Kirkuk. Davutoğlu sent unity and solidarity messages to Turkmens, adding that Turkey has not forgotten them.

"This is the most important day of my life. I am visiting Kirkuk, which was always in my dreams. I am happy to be the first Turkish foreign minister to visit Kirkuk in 75 years. Kirkuk will be an eternal city of peace in Iraq where our Turkmen, Kurdish and Arab brothers live together," said Davutoğlu, adding Turkey considers itself equally close to all ethnic and religious groups in Iraq.

The Turkish minister added that Kirkuk will become one of the fastest-growing cities in the world with its vast natural resources, adding that Turkey was ready to extend any support for the development of the city.

Davutoğlu stated that Kirkuk -- with its history and social structure -- reflects the soul of the Middle East.

Davutoğlu had a series of talks in the city, which is also the home of a sizeable population of Turkmens, ethnic kin of the Turks.

Turkish diplomatic sources told the Anatolia news agency that Davutoğlu's visit was long planned but it was kept secret due to security reasons.

Davutoğlu's Kirkuk visit followed his meeting with Kurdistan Regional Government (KRG) leader Massoud Barzani for talks on Syrian Kurds. Iraqi Kurds have long been at odds with the Iraqi government and relations between Ankara and Baghdad have also been tense, due to what Turkey perceives to be the Iraq's Shiite-led government's attempts to monopolize power at the expense of other groups in the country.

In a development that is likely to further disturb the Iraqi government, Prime Minister Recep Tayyip Erdoğan was due to meet with Iyad Allawi, a political rival of Prime Minister Nouri al-Maliki, later on Thursday in Ankara.