The Syrian Observatory for Human Rights said the ISIL now controls an area of Syria five times the size of neighbouring Lebanon. 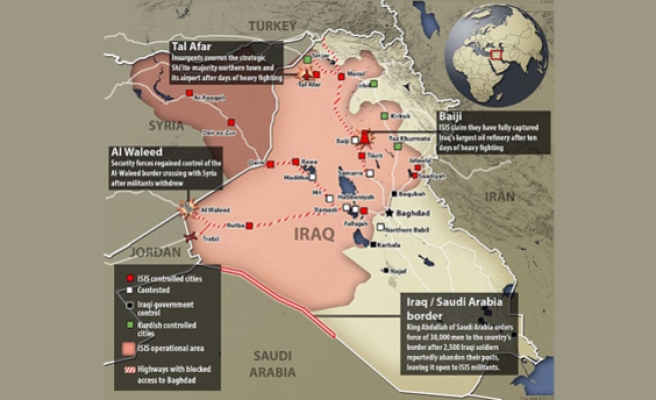 Around 30 fighters from the self-declared Islamic State og Iraq and the Levant (ISIL)  broke out of a makeshift jail where rival Syrian rebels had been holding them, a monitoring group said on Friday as it detailed the latest territorial gains by the al Qaeda offshoot.

The fighters demolished a wall to escape the building - a former school - after fellow ISIL fighters took control of al-Hawaaj village where al Qaeda loyalists had been holding them, the Syrian Observatory for Human Rights said.

In the same province on Thursday, the ISIL seized control of Syria's largest oil field from the Nusra Front, al Qaeda's official wing in Syria, consolidating its position in the eastern Deir al-Zor province bordering Iraq.

The ISIL, which has declared an independent state in parts of Syria and Iraq, includes thousands of foreign fighters and has become the main recruiting magnet for fighters from Europe and North Africa. The Observatory said the 30 fighters that escaped on Friday were all Syrian.

The group is now considered the most potent rebel band in Syria and its rivals complain that it spends more time fighting them than Syrian army forces.

It also captured the villages of Quniya and Buqris in the Deir al-Zor province from Nusra late on Thursday, the Observatory said. The villages are close to the town of Mayadin, which the ISIL seized earlier in the day.

The Observatory, an anti-Assad group which tracks the violence, said the ISIL now controls an area of Syria five times the size of neighbouring Lebanon.

In Deir al-Zor province, only the regional capital and airport - still held by Syrian government forces - and a few villages remain outside ISIL's control.

In the north, the group took the village of Zor Maghar, close to the Kurdish city of Ain al-Arab, after three days of fighting with Kurdish forces, the Observatory said.

Ain al-Arab, known as "Kobani" in Kurdish, is in Syria's Aleppo province, strategically placed on the border with Turkey.