"Preparations are now underway for their release and to get them out of Jerusalem," spokesman said. 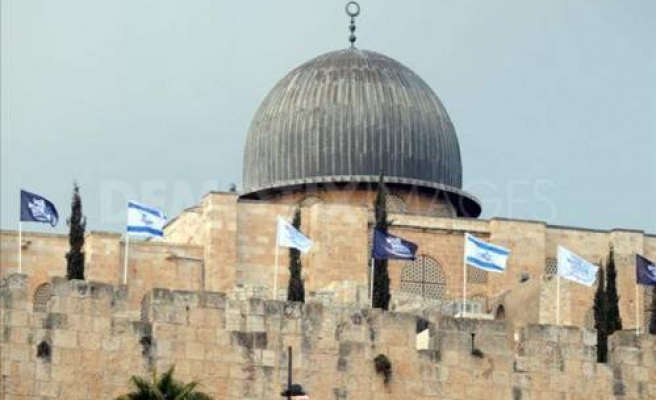 Khatib was arrested earlier Wednesday, along with senior group member Sheikh Ali Abu Sheikha, on charges of "involvement in rioting" and "disturbing the peace" in the holy city's Aqsa Mosque complex.

Njeidat told Anadolu Agency that an Israeli court had ordered the two men released on $150 bail on condition that they stayed away from the city for the next 12 days.

"Preparations are now underway for their release and to get them out of Jerusalem," he added.

Njeidat added, however, that the court had not yet closed the case against the two men, noting that both might face more sanctions in future.

It is the second such move against Islamic Movement members this month.

The Jerusalem Magistrate Court later ordered Salah's release on bail – set at 50,000 Israeli shekels – on condition that he remain at least 30 km from the city for six months.

Njeidat said the latest arrests aimed to "help the Israeli occupation tighten its grip on Al-Aqsa Mosque by hunting down every advocate of this righteous cause," referring to the movement's efforts to defend the iconic mosque from increasingly frequent violations by extremist Jewish settlers and Israeli police.

The Islamic Movement in Israel has called on Palestinians to converge on Al-Aqsa to counter plans by Jewish settlers to mark the Jewish holidays by storming the mosque's precincts.