The new round of fighting broke out in Tel Abyad, a border town near Turkey in the rebel-held Raqqa province. 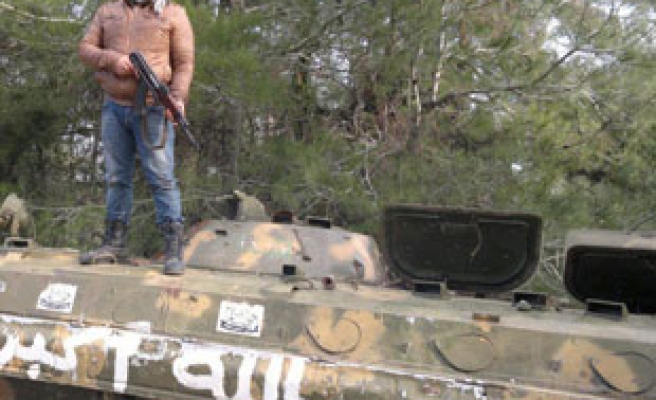 Clashes between Islamist rebel forces and Kurdish militias spread to a second Syrian province on Saturday, activists said, as factional tensions rose in the north of the country.

The fighting is further evidence that the 2011 uprising against President Bashar al-Assad's rule has splintered into turf wars that have little to do with ousting him and highlight the risk of regionalised conflicts that could have an impact on neighbouring countries.

The new round of fighting broke out in Tel Abyad, a border town near Turkey in the rebel-held Raqqa province. The Syrian Observatory for Human Rights said clashes began after Kurdish militias in the area discovered fighters from an al Qaeda-linked rebel group trying to rig one of their bases with explosives.

The Kurds retaliated by kidnapping several fighters, including the leader of the Islamic State of Iraq and Sham, one of the most powerful Qaeda-affiliated forces fighting in Syria.

The country's revolt has transformed from a peaceful protest movement into a civil war that has killed more than 100,000 people and become increasingly sectarian.

Syria's ethnic Kurdish minority, meanwhile, has been alternately battling both Assad's forces and the rebels. Kurds argue they are backers of the revolt but rebels accuse them of making deals with the government in order to ensure their security and autonomy during the conflict.

Divided between Iran, Turkey, Iraq and Syria, the Kurdish people are often described as the largest ethnic group without a state of their own.

Activists also reported on Saturday a rare eruption of clashes between Assad's forces and rebels in the coastal province of Tartous, an Alawite enclave and Assad stronghold with only a few pockets of revolt.

The fighting broke out near the Sunni town of Banias, the site of a massacre of dozens of people only a few months earlier when militias loyal to Assad stormed the area after a rebel attack on their fighters.

An activist from the area said Assad's forces launched a new assault after discovering more rebels operating in the area.

The Observatory reported a massing of security forces and militias loyal to Assad both near Banias and the Sunni village of Bayda, which was also the site of a massacre of dozens just days before the Banias killings.

Assad's forces have been on the offensive the past two months after a string of victories. They are trying to cement control of a belt of territory between the capital Damascus and his stronghold on theMediterranean coast.

Security sources have said Assad's next move will be to push on to rebel-held territories near the border areas of northern and southern Syria, for which they are slowly trying to build up forces in the area.

Assad's offensive has been dogged by rebel counter-attacks in the north, even as a string of government victories elsewhere in Syria has shifted the battlefield tide in his favour after more than two years of bloodshed.

Activists said opposition forces advanced on the northern town of Khan al-Assal on Saturday and appeared close to seizing one of the last towns in western part of Aleppo province still held by Assad's forces.

Some activists suggested the army may be trying to hammer areas near a critical road leading to Aleppo in order to distract the rebels and bring in supplies to its forces.

Rebels have been blockading government-held areas in Aleppo city, Syria's largest urban centre. Aleppo has been mired in a bloody stalemate since rebels launched an offensive in the province last year.

Islamist rebels also appear to be leading the fight to seize Khan al-Assal.