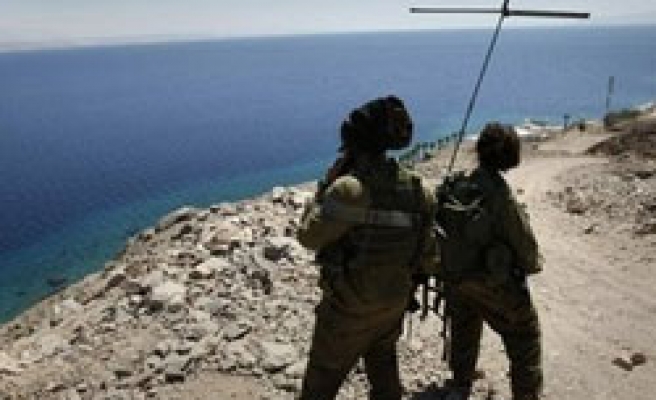 Egypt and Israel have agreed to increase the number of Egyptian troops along the border in the Sinai peninsula, a senior security official said on Friday, following a spike in violence that sparked a diplomatic row between the two countries.

At least eight Israelis were killed last week during a cross border attack by militants that Israel said had come from the Gaza Strip through Sinai.

Israel accused Egypt of losing its grip on the area, while Egypt threatened to withdraw its ambassador, in the worst dispute between the countries since a popular revolt overthrew Egyptian President Hosni Mubarak in February.

"After continued negotiations, there is now an initial agreement between Egypt and Israel to deploy more Egyptian troops in the Sinai region," the Egyptian security official, who requested anonymity, told Reuters.

Egypt has long complained that restrictions imposed by its 1979 peace treaty with Israel made it difficult to maintain security in Sinai, a buffer zone between Israel and mainland Egypt.

Under the Camp David accord, Sinai became a demilitarised area, allowing Egypt to deploy only 750 border guards along its 200km (124 mile) long border with Israel.

The official said the number of troops and the equipment Egypt would be allowed to deploy were still being finalised.

The deal would be added as an annex to security provisions of the treaty, the official added.

The Economist reported earlier that Israeli Defence Minister Ehud Barak would let Egypt deploy thousands of troops in the Sinai to tighten security.

Egypt would bring in helicopters and armoured vehicles but no tanks other than one battalion already stationed there, the Economist added.

The Egyptian official confirmed that helicopters and armoured vehicles will be deployed in the area.

Egypt has launched a security operation to root out up to 1,300 armed militants, who have launched a series of attacks on Egyptian security forces and a pipeline that exports gas to Israel and Jordan.

"Following recent violence at the border, Israel has become more understanding about the security situation we are dealing with in Sinai," an Egyptian intelligence official said.

"A mountainous region like Sinai as big as 60,000 square kilometers, needs a regional military command of its own," Zayaat told Reuters. "Currently, troops there are part of the military command at the Suez Canal," he said.

He said that a real amendment would require "a change in Egypt's force structure in the Sinai and an upgrade of surveillance equipment and the weapon system."

He said that Sinai would need two military divisions, each with between 12,000 to 20,000 soldiers.
On Sunday, the independent newspaper Al Masry Al Youm reported that Egypt is considering setting up a buffer zone on its border with the Gaza Strip following the recent bloodshed. The plan includes removing smuggling tunnels running across the 14-kilometer-long border with Gaza.

The UK-based newspaper Al-Hayat reported Monday that Egypt has deployed 1,500 troops in the Sinai peninsula, a move that was coordinated with Israeli security forces.