Israeli airstrike has killed one Palestinian and wounded four more as the violence comes as leaders hold peace talks in Jerusalem. 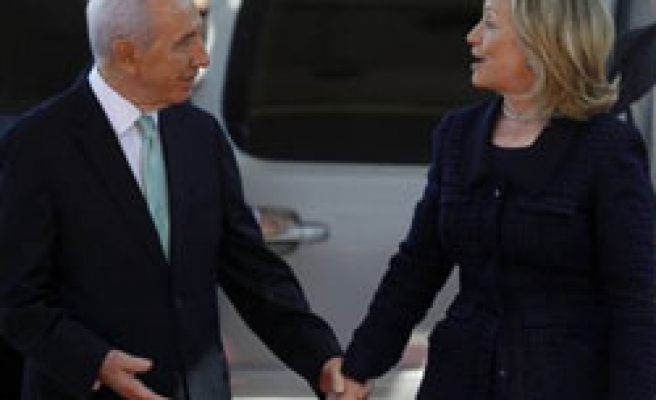 Israeli airstrike has killed one Palestinian and wounded four more as the violence comes as leaders hold peace talks in Jerusalem.

She arrived in Jerusalem on Tuesday for more three-way talks with Palestinian president Mahmud Abbas and Israeli Prime Minister Benjamin Netanyahu, a day after two lengthy sessions with them in Egypt’s resort of Sharm el-Sheikh.

On her first visit to the Middle East since launching new direct peace talks in Washington on September 2, Clinton discussed the partial 10-month Israeli freeze on illegal settlements due to expire this month, US officials said.

US envoy George Mitchell, who participated in the talks in Egypt, said the Israeli and Palestinian leaders ‘’began a serious discussion on core issues.’’

But, in Egypt, Mitchell gave no tangible sign of progress.

When pressed on whether progress had been made on illegal settlements, Mitchell replied: ‘’We continue our efforts to make progress and we believe that we are moving in the right direction overall.’’

The Palestinians have warned that if the moratorium is not extended, the talks could come to a complete halt.

However, on Tuesday a compromise was not reached over the illegal settlements.

One Palestinian has been killed as Israeli aircraft bombed wthat they said tunnels under the Gaza Strip's border with Egypt on Wednesday, witnesses said.

The violence coincided with a visit to Jerusalem by U.S. Secretary of State Hillary Clinton.

Witnesses in the Palestinian town of Rafah, in the southern Gaza Strip, said the Israeli air strikes killed a tunnel worker and wounded four other people.

An Israeli army spokeswoman said a rocket and eight mortar bombs fired from the Gaza Strip, landed in southern Israel. No one was hurt.

Speaking after she met Israeli President Shimon Peres, Clinton described Netanyahu and Abbas as sincere and serious and urged them to seize what she called "a moment of opportunity" despite deep pessimism about the U.S. goal of resolving the conflict's main issues within a year.

Netanyahu and Abbas resumed direct dialogue in Washington on Sept. 2, met again with Clinton in Sharm el-Sheikh, Egypt on Tuesday, and will hold a third three-way meeting on Wednesday in Jerusalem.

"They are getting down to business and they have begun to grapple with the core issues that can only be resolved through face-to-face negotiations," Clinton told reporters. "I believe they are serious about reaching an agreement that results in two states living side by side in peace and security."

She made no mention of the settlement dispute, but acknowledged that many obstacles remain.

The core issues are the borders of a future Palestinian state, the fate of Palestinian refugees and the future of Jerusalem and Israel's security.

Netanyahu said on Sunday he would not extend the partial construction moratorium on the occupied lands.

The Palestinians see the settlements as land grab to halt a homeland on the occupied Palestinian lands.