Netanyahu fended off intense international pressure, but urged Abbas not to abandon peace talks in protest. 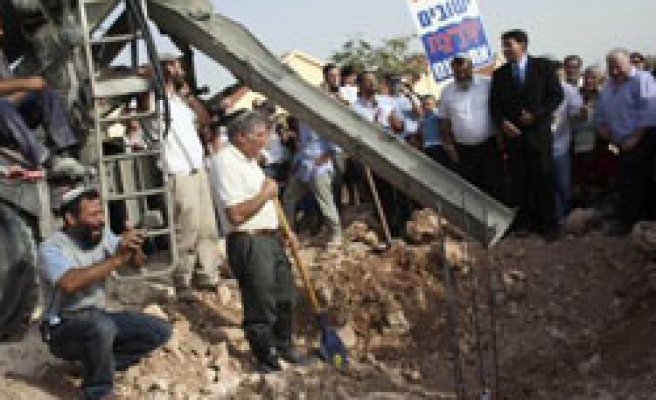 "I call on president Abbas to continue with the good and honest talks we have just embarked upon, in an attempt to reach a historic peace agreement between our two peoples," Netanyahu said in a statement early Monday, minutes after allowing the 10-month partial moratorium on settlement construction to lapse.

Abbas, for his part, urged Netanyahu to re-impose the building ban.

With a tooting of horns and pouring of cement, several thousand Jewish settlers and supporters declared a symbolic end on Sunday to a 10-month moratorium on construction starts in their illegal settlements.

Palestinian officials made clear there would be no decision on whether to abandon the talks, as President Mahmoud Abbas had threatened, at least until an Arab League forum met on Oct. 4.

"Regarding the Palestinian position, it will be taken after going back to the Arab follow-up committee and the PLO Executive," said Yasser Abed Rabbo, a Palestinian negotiator.

He was referring to two bodies that gave Abbas the go-ahead to resume direct talks with Israel after a hiatus of 20 months.

Visiting Paris, Abbas voiced his frustration but made no direct word to walk out of the talks, telling reporters: "If Israel chooses peace, we will continue to negotiate. If Israel doesn't, it will be a waste of time."

"We remain in close touch with both parties and will be meeting with them again in the coming days," he said in a statement.

Netanyahu imposed the freeze on housing starts in the West Bank settlements in November under pressure from Obama.

"The building freeze is over," Danny Danon, a right-wing lawmaker from Prime Minister Benjamin Netanyahu's Likud party, declared as balloons were released into the air at sundown in the red-roofed West Bank settlement of Revava.

"Today we mark the resumption of building in Judea and Samaria," he bellowed.

At Revava, near the West Bank city of Nablus, residents expressed their defiance at a groundbreaking ceremony where a mixer poured cement into a hole in the ground to launch construction of a creche.

While the act was symbolic, settlers said they would soon begin building some 2,000 illegal settlements across the occupied West Bank.

The festivities were attended by thousands bused in for the occasion.

In a plot apparently intended for construction in Revava, where signs advertise plans to put up more than two dozen buildings, settlers blared shofars, a religious instrument made of a ram's horn, as their leaders proclaimed the building freeze had ended.

Spokesmen for the 300,000 illegal settlers living in the occupied West Bank renewed their refusal to delay construction.

Tsipi Hotovely, a Likud lawmaker, said Israel should annex all the settlements to prevent their removal under a peace deal.

"Israeli sovereignty must be applied to the areas were settlements have been built," she said.

Benny Katsover, a settlements leader, exhorted supporters to "prepare for a struggle," denouncing peace talks as "nothing but a false Messiah".