Israeli forces destroyed a mosque for the second time this month and have issued a mass demolition order for Nablus. 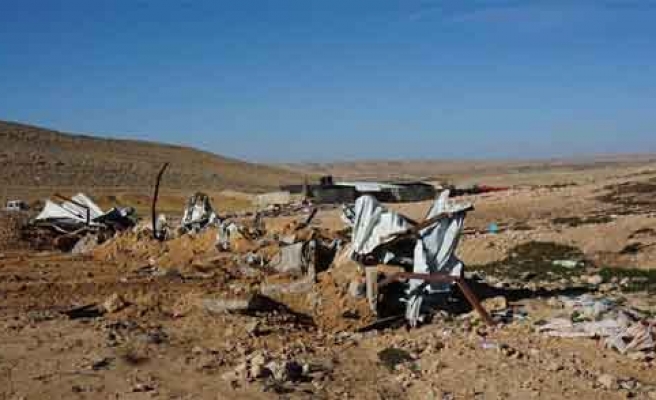 Israeli forces early Thursday demolished a mosque in the unrecognized Palestinian Bedouin village of Rakhama in the Negev  as well as issuing a mass demolition order for an area in Nablus that is home to 85 residents reports Ma'an news agency.

Israeli soldiers prevented the locals from taking out copies of the Holy book of Qur'an from inside the mosque before demolishing, the source added, the sources added.Israeli authorities on Thursday month.

Like the housing in the rest of the village, the mosque was built with corrugated metal. Israeli forces initially destroyed the mosque on Jan. 6, but residents rebuilt the structure, which was destroyed again.

Following the first demolition, Palestinian member of the Israeli Knesset, Abu Arar, said he attempted to prevent the demolition, but had been unable to convince the Israeli authorities. "(They) do not spare any effort in exerting pressure on the Arab population of the Negev in their attempt to empty the land of Arabs and to displace them," he said.

According to the order, the 85 residents that will be affected by the demolition have until next Monday to evacuate their homes.

A spokesperson for the Coordination of Government Activities in the Territories (COGAT) did not provide immediate information on the demolition order, or why it was issued.

Speaking to Ma'an news agency, Ghassan Daghlas, who monitors all settlement activity in the northern West Bank, confirmed the news of the demolition order and also said that “the Israeli authorities are committing a humanitarian massacre against Palestinians in the area, especially as they have been in the area for dozens of years.”

Daghlas called on all human rights and humanitarian organizations to pressure the Israeli government to stop the “inhumane” demolition order, which he said directly supports Israeli settlement in the area.